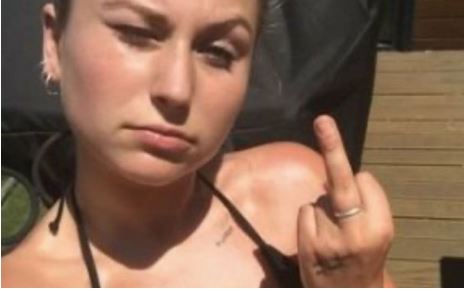 Yesterday they received a personal apology from Scott Morrison in the parliament.

Graceless Tame knew there would be an apology from the PM.

Yet, she demands the PM listen to her and do her every bidding.

Otherwise she will throw a graceless hissy fit.

Here’s what she wrote – “How about some proactive, preventative measures and not just these performative, last-minute bandaid electioneering stunts?”

At every recent opportunity, Graceless has indulged in stunts, from premeditated face-pulling and scowls while being photographed with the PM, to refusing to appear in parliament when the PM offered her a personal and public apology.

Graceless has become so stunt and publicity motivated, she has become quite the stunt expert.

Gracelesss has allowed the Aussie Award of the Year to go to her head, with petulant tantrums, face-pulling and pouting in photo opportunities with the Australian PM. She is cheered on by the misandrist media (queue Katherine Murphy of The Guardian) who make excuses and justification for bad behaviour.

Meanwhile Graceless will have multiple photos with the opposition leader, glowing with smiles, thumbs ups and supportive gestures.

‘Each Way’ Albo has done no more or any less than the PM.

In fact he also gave a public apology in the parliament, following the PM’s apology.

Not a peep about an ‘election stunt’ from Graceless Grace.

It’s not the cause, it’s the side.

Graceless is 27 years old, yet displays the immaturity of a 12-year-old, cheered on by her new-found misandrist friends, not realising she is being manipulated. Unfortunately for her worthy message, her contrived behaviour, playing to the misandrist mob, is doing her personal reputation more harm than good with mainstream Aussies.

Graceless’s new bestie, Brittany Higgins, was inside the chamber at the time of the PM’s apology, but stormed out of the parliament in tears after the PM’s very heartfelt apology.

Found naked on her employer’s office lounge in the daylight hours, Ms Higgins has claimed she was raped at her workplace in the early hours of Saturday 23rd March 2019.

What has never been explained by Ms Higgins is, what was she was doing at her workplace around 1:00am on a weekend morning. There was an early story they decided to let the taxi go as her male companion had to get some belongings from the office. Hmmmm….So why didn’t Higgins stay in the taxi to continue her journey home instead of going to the office in the wee hours?

The person she accused of the crime lost his job and has vehemently denied the accusation.

He will defend himself and give his version in court.

Plenty of us, male and female, including me have felt frisky after a few drinks at a bar and ended up in a bed, or a lounge with a random at some ungodly hour, then after sobering up the next day had a rethink and moved on. I knew what I was doing at the time, of my free will. My female friends tell me they’ve all done the same. Millions of times around the world, over centuries this has been repeated.

Was she intending to catch up on some administrative paper work at 1:00am on a weekend?

Until Ms Higgins explains what her motive was for letting the taxi go, entering her employer’s office with a male colleague, there remain questions for her to answer.

These two women have had experiences that have given them a profile.

How they use that platform will determine whether the Australian public takes them seriously, or not.

But you catch more flies with honey than vinegar, regardless of what the out-of-touch Guardian misandrists opine.

And you don’t deal with abuse by being abusive to people who publicly apologise to you.