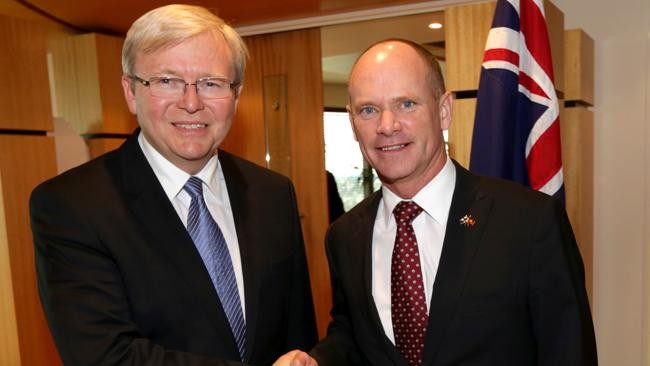 Kevin Rudd has been campaigning in his home state with the message that Tony Abbott will be another Campbell Newman. Let's hope so.

By Kevin's own measure of success – jobs – Queensland is now the national star performer.

In just 17 months the Queensland LNP Government has reduced taxpayer debt and expenditure by cutting into dead wood and bloated bureaucracy, creating an environment for growth.

With lower debt there's less need to gouge the taxpayer and business, where money is needed to invest and grow. Business confidence is up.

Rudd can no longer warn the country Abbott is another Newman, because that's what the country is crying out for.

Business at a national level is stagnant, as it was in Queensland, as it was in NSW, as it was pre-Kennett in Victoria. Business needs grown up leadership and responsible policies, not selfies or nursery rhymes read to 4 year olds.

These results have blown out of the water the Rudd-Wong-Bowen shrill cries of an Abbott 'slash and burn', 'cut to the bone' and 'austerity' program. Jobs grow from less tax and less debt and deficit. Just look at the mess in the socialist European countries.

Tough love and discipline is the only real option on the road to recovery.

Economists also warn of national unemployment trending to 6% as mining slows. Even Rudd’s budget forecast is an escalating 6.2%.

Queensland is trending the opposite way with jobs growth in areas of tourism and construction in SE Queensland, as well as the coal seam gas industry.

In contrast, Labor states such as Tasmania (8.2% unemployment) and South Australia (7.1%) are facing a jobs crisis. Yes, the only two Labor states.

If Rudd and his Labor colleagues were honest about wanting to create jobs, they could do worse than adopt a leaf from the Queensland LNP book when it comes to trimming  bloated bureaucracy and promoting an environment where jobs will grow in the private sector.

After all, Rudd did suddenly lurch to the right when his political survival depended on stopping the boats.