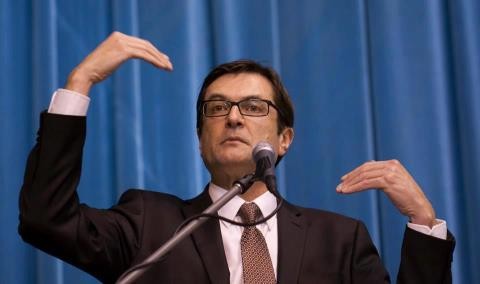 Did I read that right?

Minister for Climate Change and Energy Efficiency, Greg Combet, is appearing before ICAC for supporting a tainted coal mine in the NSW Hunter Valley.

The Corruption watchdog hearing has heard the idea of the training mine was the brainchild of former union boss, John Maitland, and fellow insider investors. Combet’s union mate, Maitland, took what should have been a very lucrative coal resource for the state (i.e. the people) of NSW and turned it into their personal ‘goldmine’.

Combet used his electorate letterhead to endorse the scheme:

"The proposal by Doyles Creek Mining to develop a world-class training facility in the Hunter Valley, in the event that an underground mine proceeds, will in my view make a significant contribution to meeting the skills shortage that exists in the mining industry."

He also wrote that the proposed involvement of Newcastle University, the Westpac Rescue Helicopter Service and the Hunter Valley Training Company "will ensure there is broad community benefit and confirms that this project deserves strong support"

Combet’s position is hypocrticial and untenable.

Coal mines are 'dirty energy' according to him and his government.

The whole purpose of Greg Combet's 'Climate Change and Energy Efficiency' ministry is to close down mines in order to move to 'clean energy' to combat climate change (one sledgehammer being his much-maligned carbon tax designed to punish and close down coal mines).

This is a clear conflict of interest from Greg Combet.

The Ministry For Climate Change and Energy Efficiency is a bureaucratic farce.