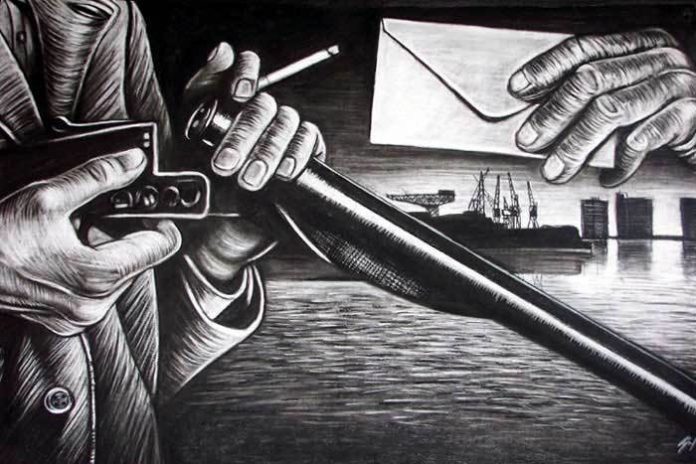 There's been a lot of crowing and elbowing to centre stage over the Gillard-Wilson affair this past week.

I've watched it from the sidelines with amusement. Some of the peacock-like tail preening would make a great subject for a TV sitcom script, based on day-to-day media egos at play. The brilliant Frontline TV series of fifteen odd years ago did a sterling satirical job highlighting the foibles, frailties and farcical footwork of tabloid TV current affair shows. The time’s pretty ripe for a Working Dog Productions treatment of newspapers, radio, and the whole media shebang, care of our current Prime Minister, her 1600 strong media staff and a largely compliant, trepid fourth estate. Yes Prime Minister on steroids

Part of the script would have to be centred around bumbling and confusion in the media with how to juggle a hot potato, while walking a tight rope over an elephant in a room, with their pants around their ankles.

Controversially, two journalists were sacked last year for daring to do their job; print’s Glenn Milne and radio’s Michael Smith. They did what they were trained and paid to do, and what their public expected of them; to report on a story of which the public has a right to know. Gillard’s rage so frightened and intimidated news organisations and reporters, the story was dropped from the national agenda, stone cold dead. That is until Larry Pickering came along and hauled through the dying embers on his facebook page and websites around mid June this year. The blog went viral. Pickering was banned from, and warned by, facebook over an opinion piece. The facebook ban story was reported as the afternoon lead on News Ltd’s news.com.au site. Shortly after, Pickering was contacted by Milne and Smith to recount their experiences, pointing Pickering in the way of a few contacts. In no time Pickering had more material than he needed and was away with his now hugely read and infamous website The Pickering Post.

Pickering would like nothing more than for Smith and Milne to get their old gigs back, still holding a candle for their reinstatement and right to inform the public.

Most of the material that’s poured into Pickering’s mailbox has been unsolicited. Unremarkably, much of the information that’s come his way is the same material offered and provided to Smith. So while there may be similarities in the tale, different storytelling styles, much (but not all) stems from the same documents.

The main difference being, Pickering got the story up with his deliberately colourful and melodramatic style that’s intrigued and reeled in readers, along with a now nose-out-of-joint mainstream media, caught out derelict in their duty, then choosing to react by demonising and then shooting the messenger.

Milne had done a lot of digging into the story over years prior to his 2011 report. In Smith’s case the intro to the affair was handed to him on a silver platter. Former Pauline Hanson advisor and svengali, John Pasquarelli produced and shopped around an affidavit (into the AWU scandal) of former AWU Victorian President, Bob Kernohan. The affidavit was first offered by Pasquarelli to the Libs (Abetz and Minchin) and to broadcaster Alan Jones. None of them wanted a bar of it. It was then offered to Smith who decided to broadcast; the most costly decision of his short broadcasting career.

Once Pickering ran with it online, Alan Jones had a rethink. He was the first media horse to bolt, five days after Pickering published, by inviting Smith to chat on air while reading word for word from The Pickering Post. Andrew Bolt followed with references to Pickering and a direct link to the infamous bed stone to this story, the Ian Cambridge affidavit prepared by Robert McClelland, first published on The Pickering Post.

Pickering also first published the news Ralph Blewitt, Bruce Wilson’s partner, would be returning to Melbourne from Malaysia to talk to Melbourne lawyers examining the scandal. Some weeks later, the national broadsheet, The Australian revealed in a front page ‘exclusive’ Blewitt had indeed returned to Melbourne and was seeking immunity from prosecution in a deal to reveal all to the authorities. The cat was now out of the bag and the job of The Pickering Post to get the story into the public domain was done. The Post’s aim was to create so much interest from the public that the mainstream could no longer ignore what was clearly in the public interest. Ignoring was tantamount to failure. Derryn Hinch interviewed Pickering live on 3AW, in what Hinch describes as the biggest reaction to any story or interview this year. Yesterday Hinch was informed his contract would not be renewed.

The furore caused by Pickering’s continual posting could no longer be ignored. The Australian’s brilliant award winning investigative reporter, Hedley Thomas was now a dog with a bone. With his fierce and fearless reputation, he became the go-to guy for former Slater and Gordon law firm partner Nick Steyant-Browne who released clarifying and damning taped interview transcripts of Gillard around the time she was caused to leaved the firm over the scandal. Her version differs from Steyant-Browne's. He says her failure to open a file and consult fellow partners created an atmosphere where the firm took a serious view of what had transpired.

Rightly proud of the work of its investigative reporter, Hedley Thomas, The Australian, in its editorial and via columnist Peter van Onselen, have endeavoured to claim all credit for the story getting national prominence, writing off websites as the ‘bloggosphere’ and the ‘twitterverse’. To this end, they and other media repeatedly refer to Hedley Thomas as more legitimate because he is indeed a ‘Walkley Award Winning’ reporter. For those unaware, a Walkley is the media industry award for excellence in journalism. If a Walkley Award is indeed the barometer for excellence, credibility and integrity in journalism, Pickering is a five time recipient of the Walkley Award, one of the most awarded figures in journalism. I’m also a Walkley recipient. We’ve both also worked at The Australian. White-washing and historical revision by editorial writers are not exacty examples of excellence in journalism. Regardless, the story is being investigated and published by people who know what they’re doing, whether The Australian or The Pickering Post.

Last night, Michael Smith launched his own news website, Michael Smith News. The Pickering Post and Michael Smith News published much of the documents they’ve had in their possession, sourced from Melbourne ex-union lawyer Harry Nowicki, obtained under Freedom of Information application. Much of it is the back-up to Pickering’s revelations. The documents support the parts of the story being told. There are hundreds and hundreds of pages to sort through.

The claim of The Prime Minister that the posts of Larry Pickering are those of a ‘sexist’, ’misogynist’, ‘nutjob’ on a smear campaign will be shown for what it is. These are not the ravings of a nutjob. If he’s a nutjob then so are the WA Major Fraud Squad who have recommended charges be laid, and as I understand it, a prominent criminal QC and former head of the National Crime Authority is drawing up opinion on the case.

The tale being told here is not just of the AWU scandal and the connections to the PM’s office but how a compliant and timid media allowed an unemployed radio broadcaster and a retired old cartoonist to do most of the heavy lifting.

INDONS WILL TOE THE LINE WITH TONY