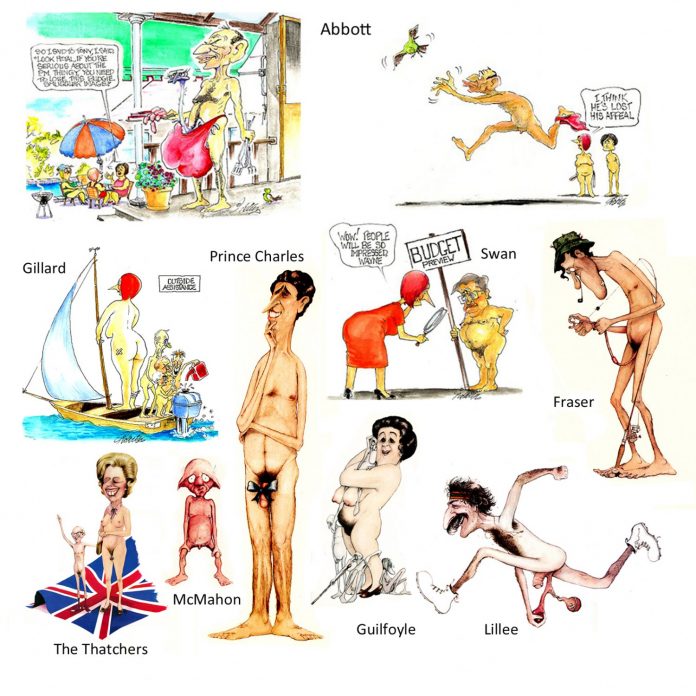 In 30+ years of cartooning, I’ve never seen a politician, let alone a Prime Minister, react to cartoons and / or questions in such a way that he (or she) would resort to personal abuse and denigration of the satirist at a press conference. She lost it.

The Prime Minister attacked Pickering at a media conference, not once but three times, today labelling him, his cartoons and relevant revelations and questions about her dodgy past, a ‘misogynist’, ‘sexist’, ‘smear’ campaign. (He’s drawn a relatively few cartoons of Julia in the nuddy – but no private part showing). Commentators are now wondering, "Golly, Pickering hasn’t drawn male politicians like that, has he? He must be a misogynist sexist. The cartoons are offensive. He must be a woman hater."

Again, research is severely lacking by the ‘young and naive’ commentators I was watching on the telly this afternoon.

Pickering shot to national prominence over 30 years ago as cartoonist for The Australian when he infamously drew our then PM, Malcolm Fraser and other political notable figures (Hawke, McMahon, Howard, Prince Charles, Bjelke-Petersen, Margaret Guilfoyle and even the Queen) in the nuddy running around the jungle. These depictions of our politicians were so popular with readers many bought the weekend paper, turning straight to The Jungle Series strip for their weekly fix of tall-poppy pricking. The quintessential Aussie larrikin, Pickering has never aimed his humour at the pollies. He draws (and still draws) and comments for the every man (oops, and woman).

Then there were the notorious Pickering calendars (a commercially successful byproduct of The Jungle Series) that sold out year after year, for over a decade in the hundreds of thousands. The subject of the calendars titled, ‘Pickering’s Political Playmates’?

Politicians and personalities, of both sexes, and all sizes and shapes – in the nuddy! Outrageously hilarious!

Private parts were portrayed uproariously as reflections of the caricatured character’s personality. Australians laughed in the millions. This unique Aussie ability to self deprecate, to laugh at ourselves, and our leaders, to not take ourselves too seriously, is ingrained in the national character and has been since the place was first settled by those Pommy bast… the British.

Gillard’s been treated no differently, or any less, than the others, most who call Pickering asking for the original drawings of themselves. Prince Charles did so and he’s a Pommy bast…um, British. I just got a message a couple of minutes ago from Pickering saying that reporter Peter van Onselen, who Pickering drew in a cartoon today cowering under a TV studio desk afraid to ask the PM a question, emailed Pickering this afternoon, asking for the original cartoon. My respect for van Onselen, who I’d yesterday called – perhaps a little too harshly – a love struck teenager, has gone up a notch or three.

That’s how you do it, Prime Minister. Ya laugh at yaself. Pickering and I have over the years, caricatured and lampooned politicians, many who ask for the original drawing. Clever PMs and Premiers launch cartoon products and books with cartoonists when they’ve been the centre of the joke. Pickering was a favourite for pics with pollies who saw political advantage in being seen by the Australian public with the court jesters. It helps with their common touch thing, and hence public opinion. Hint, hint, Julia.

Today’s press conference was mostly puff and bluster and no substance, with baseless abuse thrown in for added spice. The PM did herself no credit. Where’s the sexism in Pickering’s cartoons? Where’s the personal smear? The only smearing I saw was of the cartoonist by the PM who doesn’t get or understand Aussie humour and demands for accountabilty as most of the population do.

As a long time student of Aussie cartooning I see a track record of equal opportunity nuddiness by Pickering. Even Abbott’s copping the nuddy thing, the exception being worse for him because you can see his little…um…budgie.

Where’s this misogyny lurking? If a cartoonist treats you equally to others in his cartoons, he’s being ‘sexist’ and a ‘misogynist’.

Anyway, far be it from me to tell you and your clever minders how to deal with cartoonists. The advisors seem to be doing an excellent job advising you so far.

Today I was left scratching my head even harder about how things were done at the ‘free work’ law firm you practiced. A charitable law firm that’s growing commercially like Topsy. The PM’s explanation did not match with most peoples’ understanding of legal billing.

As for the ‘nutjob’ barb, PM. That ‘nutjob’ got you standing at a podium for almost an hour, all from his keyboard, inciting legitimate questions while you fielded answers about your very questionable past. If he’s a nutjob, then he should have been ignored and discredited long ago. But you gave him all the time in the world today, the longest press conference from a PM in decades according to stunned political observers. Pretty crafty ol’ ‘nutjob’.