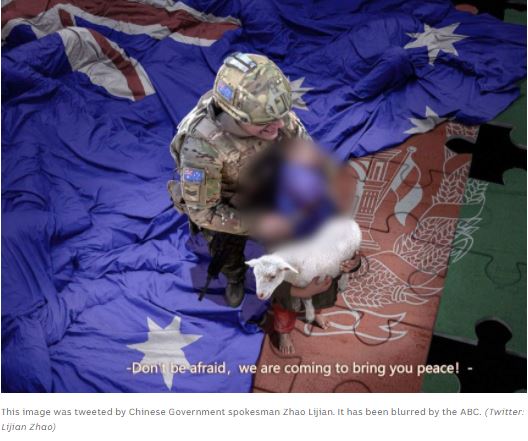 You weren’t expecting this, right?

Then, out of left field, today we saw the doctored image of an Australian soldier slitting the throat of a child being published by the Chinese government.  Why is anyone surprised?  We basically handed them this stuff on a platter.

While Angus is trying to figure out which officers can now be cashiered to divert any blame from him – note the total change of direction since last week’s “no officers will be punished” approach – nine soldiers have taken their own lives and the world watches on in absolute breathless wonder as our politicians and senior officers start eating their own tails.

Their “about turn” in the light of public opinion simply demonstrates how weak their original position was.  How about we get some leaders who actually possess the qualities of leadership?

I doubt you would see the Russians admitting war crimes in a war.  What I can’t figure out is that there’s never been any war crimes reported by Australian soldiers from the Boer War until now.  Why is that?

Is it because there’s not been any atrocities, or is it perhaps because the ABC didn’t offer rewards to the other side for reporting “incidents”- until now?  Wait.  Isn’t the ABC funded by the public purse?  What a patriotic bunch they are.

We need to ask ourselves the question – where was the outrage when ISIS had men in orange jumpsuits hacking their heads off on the evening news?  During World War 1 and World War 2 we bombed entire cities into oblivion, killing non-combatant men, women and children.  Where was the outrage then?

Our fallen in Afghanistan didn’t die of boredom.  They were killed by Afghan and foreign fighters – at times aided and abetted by the local population – in a conflict that, at its very heart, was “kill or be killed”.

Make no mistake; it was not a picnic.  Our troops were sent on “kill or capture” missions.  Let that sink in.  The first word is “kill” and it is used in acknowledgement that sometimes you don’t have the luxury of taking prisoners.

Osama Bin Laden was killed in his own house.  Could he have been taken alive?  I don’t know.  I wasn’t there.  Were all targets in Afghanistan killed?  Certainly not.  When they could have been effectively taken alive and evacuated from the zone of hostilities they were.

Back to the published image from China today.  We are giving them the ammunition and they are firing it straight back at us.  Why do we do it?  Have we no pride?  Have we no sense of national security?

The Chinese have already telegraphed their upset with Australia over the COVID-19 enquiry.  What did you expect?  Of course, they are going to raise tariffs, flex their economic muscles any way they can and rub our noses in our own faeces any/every chance they get.

They’re just demonstrating they have bigger balls than any of our politicians.  I expect they’ll get away with it too.

Why is no-one afraid of us?  Because our foreign affairs and military are more like social experiments than serious, robust examples of a strong economy with seasoned, competent professionals at the helm.

How about a former senior officer as Minister for Defence?  It’s not like we don’t have one hanging around doing not much.

I’m sure Jim Molan would do a far better job than the incumbent or her predecessor.  Failing that, he might make a damn good Foreign Minister.

Not in the right faction, Jim?  Of course, party politics is more important than what’s good for the country isn’t it?

Got to give the jobs to the boot lickers while the best person for the job cools his heels on the back bench or licking his wounds since his last tilt at a job befitting his skills and ability.

Replace Reynolds with Molan and Payne with Dutton and send a clear, unambiguous signal to Beijing – and the rest of them – that we are not to be messed around with.

We mean business and we mean what we say.  Both these guys have reputations for being straight shooters and uncompromising in their approach.

Or continue the lefty social experiment while we all go down the gurgler.  Oh, and while you’re at it, buy back QANTAS and replace the CEO, so the world knows we are no longer joking around. 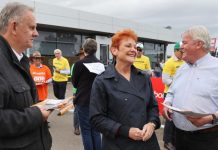