A society which abandons truth also loses touch with reality

In war, truth is the first casualty.

That quote was coined in the early years of the First World War by a woman. She was the wife of a politician. That probably made her a bit of an expert, I guess.

It’s not true for the current proxy war developing in Ukraine, of course, because we’re a society that lost touch with the truth a long, long time ago.

Some would argue that happened with 9/11. Or the First Gulf War. Or the Kennedy assassination. Maybe we’ve been lied to forever by those who start the wars and hand us the guns, and we’re only now starting to notice in numbers sufficient to have a conversation about it.

The new supervillain to replace Assad and Gaddafi and Hussein and Hitler, Vladimir Putin, has hit on that quote as he prepares the Russian people for another potential Great Patriotic War against invaders from the west.

A former Cold Warrior like Putin would know that this phrase resonates with echoes of Reagan’s famous Evil Empire speech. That was a devastating phrase because it was true.

The USSR was evil. The citizens had no rights. They had secret police to terrorise the population. Over 2 million people were in gulags by the 1960s. Corruption touched every aspect of life.

Communism, which I see as political Satanism, had destroyed everything good in Russia. That’s why Reagan’s phrase worked.

For the same reason, I think Putin’s phrase will work, too. Because it’s also true.

The West is an Empire of Lies.

We lie about everything.

We lie about psychology, parenting, politics, morality, ethics. Everything.

Lies distort and enslave. In Through the Looking-Glass, Lewis Carroll’s sequel to Alice’s Adventures in Wonderland, the White Queen tells Alice that when she was a child she’d believe ‘as many as six impossible things before breakfast’. The White Queen is a pitiful figure, led along by events and unable to control her reality.

Our entire education system has now become little more than a gulag archipelago of the mind, imprisoning our children behind barbed wire fences of delusional lies that make them easy prey for tyranny.

We like to pin the blame on the elites, too. The government, maybe. The fake news media. If we’re a bit more freethinking, perhaps the deep state.

We get the elites we deserve, though. The truth is that, from top to bottom, we ourselves have become a society of liars who cannot even bear to be in the presence of truth.

Those growing few of us who refuse to tolerate the suffocating miasma of untruth are smeared as ‘conspiracy theorists’. Bigots. White supremacists. Nazis.

The ones to be singled out during the COVID biological attack for loss of jobs, denial of access to goods and services and removal of social acceptance for refusing an experimental jab.

The thing about the truth, though, is that it is unstoppable. It always wins in the end.

Lies saturate and distort every aspect of life in the postmodern West, but for as long as globalist consumerism pacified us most of us were content to pretend to believe the lies.

Now, consumer capitalism is dying. The debt which enabled it has finally become unmanageable. It’s imploding.

Our elites know this, and they fear the consequences. They are terrified that Western people will en masse begin to demand to live in the dignity of truth as the anaesthetic of consumerism dries up.

I believe that’s why Western governments have become so aggressive against their own people and against other powers in the world. The elites have told too many lies for too long, and now the truth is hunting them down as the peasants sharpen their pitchforks.

Perhaps you don’t believe me, though. Perhaps the thought that we’re the bad guys in this movie is just too preposterous for you to consider.

I used to think that too, until I started to question what I’d been told since preschool. What I discovered is that the more you look, the more lies you find.

Our governments have been lying to us to get us to fight their wars for longer than any of us have been alive.

Let’s go down that rabbit hole a little, shall we?

For a hundred years, textbooks have taught Western schoolchildren that the United States joined World War I because the evil Huns sank the passenger ship the Lusitania.

Turns out, the ship was being used by the Americans to send weapons to Britain and the Germans had taken out a newspaper ad telling them to stop before sinking it.

We were taught at school that, a generation later, the evil Japanese attacked the British Empire and Pearl Harbour simply because of imperial greed. The reality was that the attacks were provoked by American trade restrictions and sanctions on Japan beginning in 1938.

Does that make imperial Japan the good guys? Of course not. They bombed Darwin. Screw them.

But it changes the narrative. It means that the next time the US enrages another power by using sanctions and embargoes we should probably be alert that they’re provoking a major global war here.

It’s another layer of lies we need to peel back if we’re going to get free from the groupthink our abusive elites have created in us and set our children free by teaching them to live in the truth.

Another generation, another war. The US entered into hostilities against North Vietnam after some ships were attacked in the Gulf of Tonkin in 1964. Years later it was revealed that the attack never happened. LBJ, president at the time, apparently laughed in private that, “For all I know, our navy was shooting at whales out there.”

A few years later, during the Six-Day War in 1967, the same president led the coverup of an intentional Israeli attack on the surveillance ship the USS Liberty which was intended to sink the ship, blame Egypt and then bring the US into the war on Israel’s side. More lies.

The further you go, the more you find. It’s called a rabbit hole for a reason.

The creation of the mujahideen and Osama Bin Laden through Operation Cyclone in Afghanistan in the 1980s. Support for Saddam Hussein and the use of chemical weapons against Iran in the same decade.

The babies being thrown from incubators testimony to justify the First Gulf War. Two planes taking down three buildings on 9/11, which began the War on Terror. The weapons of mass destruction justification for the Iraq War in 2003. The faking of chemical attacks on Syrians by ophthalmologist and diehard British prog rock fan President Bashar Al-Assad.

Maybe some of those wars can be justified. Maybe not. We can’t know either way, however, if all we have are lies. As Jesus said in John 8, the truth will set you free.

Our governments have not just been lying to us to start wars, either. They also lied to the Russians in 1991 when the US assured the Russians that NATO would not move an inch eastward after the Iron Curtain came down.

At the 2008 NATO summit in Bucharest, both Ukraine and Georgia had been assured their membership of NATO would be considered at the end of that year.

President Bush had wanted them admitted, but Germany and France stated this would be ‘an unnecessary offence’ to Russia. Putin attended the Bucharest Summit, and said at the conclusion that NATO enlargement toward Russia would be taken as a direct threat.

In 2014, the pro-Russian Ukrainian President Viktor Yanukovich was overthrown by a CIA-Soros colour revolution. The Americans didn’t bother hiding their involvement. They wanted to rub it in Putin’s face. Victoria Nuland, now Biden’s Under Secretary of State for Political Affairs, personally handed out pastries to the protestors.

The West tried the same trick in Kazakhstan a few weeks ago, but this time the Russians shut it down immediately.

In Ukraine, Putin fell back on the strategy he’d used in Georgia. Eastern Ukraine is essentially Russian, largely because the Soviet Union genocided 7 million Ukrainians in the 1933 Holodomor there and then sent immigrants in.

That event doesn’t get as much attention as other, slightly later, European genocides, for various reasons. The Ukrainians remember, though, and they hate the Russians for it. Understandably.

The 2014 Maidan Revolution kicked off a proxy war between Russian-backed eastern separatists and the Western-backed Ukrainian government in the Donbas as Russia annexed Crimea. That conflict has now bled into the Russian invasion of Ukraine last week.

Our politicians and media have acknowledged none of that context. The narrative provided to the public has been Russia Man Bad.

Just ignore that you might be fighting alongside actual, literal Nazis.

The elites who financially enslave, psychologically gaslight and occasionally violently conscript us to fight their wars use lies to destabilise our sense of reality. Into that reality vacuum, they insert narratives that often closely resemble movie scripts.

It therefore shouldn’t surprise us that the establishment media has been caught broadcasting footage about the invasion of Ukraine which turned out to be movie clips.

They want us totally disoriented and unable to tell what’s real so we never organise and get rid of them. It’s a textbook abusive relationship.

Jewish comedian President Zelensky became famous in 2015 by playing a high school history teacher in a TV show who got himself elected president of Ukraine to fight corruption.

He played the role so well that in 2019 the Western deep staters in control of Ukraine installed him as president in real life.

Our politicians are actors and what are actors, after all, but liars? Perhaps that’s why Reagan was so popular.

Maybe we get what we deserve.

If the tail were smarter than the dog, then the tail would wag the dog. 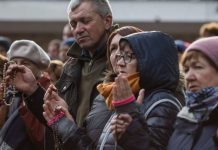