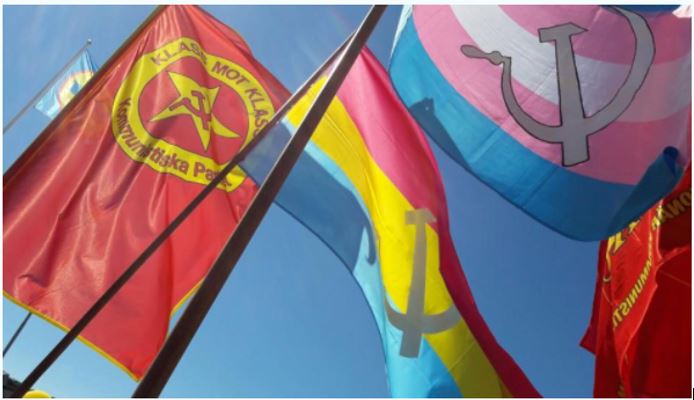 I spent some time listening to a BBC podcast the other day.

I know, I know. Call it opposition research.

It was a history podcast that I put on while Little Prepper Anon and I played Age of Empires II. He won.

The show was called You’re Dead To Me. Three very boring academics made very boring points in very boring ways about things somewhat adjacent to history and convinced themselves they were clever for doing so. I turned it off when they started swearing.

What caught my ear before I did was when one of the boring cat-lady lecturers praised another of her colleagues as ‘a fellow comrade’.

The people who did this stuff.

Of course, I wasn’t surprised. Anyone who’s been to uni since the 70s knows they’re Marxist indoctrination camps. A gulag archipelago for the mind with hairy-armpitted camp guards serving cold mental gruel.

Those Australians who haven’t been to university, however, are generally unaware of the neo-Marxist domination of our campuses. Such an observation would likely seem bizarre to them.

Communism? Today? In Australia? How could that be possible?

The image many Aussies have of communism is black and white photos like the one above. It’s an image of anti-capitalist slogans, grey uniforms and little red books, missiles being towed through Red Square and dead-faced soldiers shooting civilians trying to escape through the barbed-wire fence in the back of the head.

It’s an image of a world that they think has disappeared.

That imagery of communism has been very helpful to communists today. For while the citizens behind the Iron Curtain were becoming disillusioned with political utopianism and the totalitarian hell it created, naïve young Westerners were being indoctrinated in lecture halls and classrooms with the same philosophy that created that communism bloc in the first place.

If you want one word to sum up communism, it is power.

Communism teaches its acolytes how to attack power, how to seize power and how to use power to increase the power of communists.

Once you understand this, you begin to see that everything else is just strategy and tactics.

The thinking of normal people is based on asking whether a thing is true or good. They ask, ‘Is this right?’ The communist brain is instead trained to only ask, ‘Does this increase my power?’

Communism has its origins deep in Western occultism. Like a serpent, it is able to shed its outer layer and morph into its apparent opposite without changing its base nature. It does this through a process known as dialectics.

If you wish to understand more deeply just what it is that animates and motivates the cultural communists of today to subvert, destabilise and destroy Western societies, James Lindsay’s recent lectures are a good place to start.

If Hegelian dialectics, applied gnosticism and neo-Freudianism aren’t your thing though, just skip it.

We have all seen the woke revolution of the past few years. For those of us who’ve been in this fight for a while now, and for me it’s been 15 years, it was a welcome sign to see normie conservatives (no offence) waking up to the perils of critical race theory and transgender ideology. It gave us hope.

If you think this militant form of political correctness is not as extreme as what happened in the Soviet Union or Maoist China, then you’re just not paying attention. These people are only getting started.

They’ll become just as murderous as the most fanatical Red Guards during Mao’s Cultural Revolution, and they’ve got the technology now to go much further in their agenda of dehumanisation and genocidal social engineering.

They’re just now finishing up the stage of cementing the revolution by tearing down the monuments and statues of the previous social order.

Whiteness is genocide now. You can do entire degrees on it.

The communists are now well into the stage of singling out professionals for public humiliation for wrongthink.

Soon it will be debanking, then cutting off critical services, then camps, then extermination.

Conservatives who still think this is a good-faith debate with a few ‘loony lefties’ need to wake f**k up.

They’re coming for you, and if you’ve let the state educate your kids they’ve got them already.

We have no excuse for remaining ignorant of what comes next. Communists have now completed their takeover of all institutions of formal and informal power in Western societies.

Think the military will stop it?

How we got to this point is a narrative that bears repeating. When the communist revolution failed to spread from Russia in 1917, the intellectual elite of the international communist conspiracy dedicated themselves to understanding why ‘scientific socialism’ had not conquered the globe.

It was a philosophical Manhattan Project with a singular goal – to create an ideological superweapon that would take down Western civilisation so that communists could control the world.

The communists had identified that Western strength rested on three pillars: representative democracy, consumer capitalism and Christianity. This meant that taking over governments would be difficult to achieve and creating class warfare would be an uphill battle while economic conditions remained benign.

The Marxists, therefore, focused on taking over the institutions of the private sector and the bureaucracy through control of the education system. In this, they have been remarkably successful.

Instead of class warfare, Western Marxists agitated for war between various identity groups over any distinction which can be leveraged. Race, gender, sexuality, ability, religion. Whatever they could weaponise to turn minority groups against the Anglo Christian majority.

Defectors from the Soviet Union warned us this was coming, but they were ignored. The few who paid attention to the warnings were mocked.

1960s KGB defector Anatoly Golitsyn warned the West that the long-range Soviet strategy was to pretend to collapse in order to gain Western technology and investment for development and then one day take the West down.

Despite identifying many high-level Soviet spies in the West and writing a book on how perestroika was this strategy being implemented, he was ultimately ignored.

The next decade, KGB propagandist Yuri Bezmenov also defected to the West. In the 1980s, he gave a series of interviews about how the Soviet long-range strategy was to spread Marxist doctrines to destabilise Western societies and prepare them for communist takeover.

He was also ignored.

It is now becoming mainstream news that Russia has funded left-wing environmental groups in Western countries for decades in order to increase our dependence on foreign oil and gas and increase our economic fragility.

If only they knew how bad things really are.

This article first appeared at callapsitarian.sustack.com