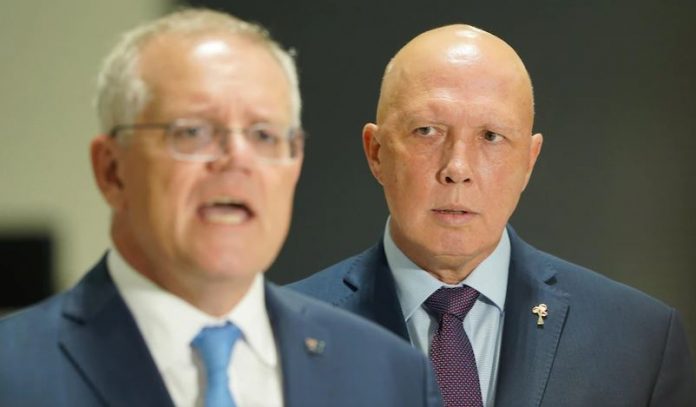 Politicians start wars then act sad when we die in them

On Monday morning, Prime Minister Scott Morrison did the unthinkable during his Anzac Day address.

He used Anzac Day to sell another war. Not just another war, too. Another world war.

Do you know what’s pretty autocratic, Scott? Putting the country under ‘lockdowns’, a term that originated in the US prison system. Making people unemployable for not taking an experimental jab. Suppressing information about the origins of a virus released in a hostile power that has all the hallmarks of a racial bioweapon.

The political class is tapping into the narratives that worked so well to mobilise Western societies during World War II, but the world has changed and they haven’t caught up. China and Russia are now less communist than us, once we understand that wokeism is just cultural communism.

Russia has Telegram. We have Facebook. Which one allows more free speech?

That didn’t stop ScoMo from rolling out the clanger that Ukrainians are basically the new Anzacs. From pro-war outlet Sky News:

Prime Minister Scott Morrison says as Australians are commemorating the sacrifices of the Anzacs who showed a “fierce and protective love of their nation” and liberty, Ukrainians are demonstrating these qualities now.

“This morning far away from here, the people of Ukraine are doing exactly that,” he said.

“And on this particular day, as we honour those who fought for our liberty and freedom, we stand with the people of Ukraine, who do the same thing at this very moment.”

I’m going through COVID right now and I didn’t think my fever could get any worse, but I was wrong. Reading that almost sent me to Emergency.

Whether you support the war effort against Russia or not, saying that the Ukrainians are fighting for liberty and freedom is a disgusting propaganda trick.

That’s something autocrats do, Scott.

It’s a bit weird to even talk about ‘Ukrainians’. The reality is that the eastern part of the country is ethnic Russian and the western part of ethnic Ukrainian. That’s a legacy of an administrative decision made during Stalin’s time to make the Soviet of Ukraine include regions like Crimea and the Donbass.

The ethnic Russians in the east want to become independent so they can join Russia, which we have to acknowledge is fair enough. There was a series of meetings leading to the Minsk Agreement in 2015, under which the regime in Kiev was supposed to let the Donbass regions have a vote for independence. The Ukrainian government refused, the regime in Moscow started arming separatists, the Ukrainians fought back and then Russia invaded in February.

On the Ukrainian side, there’s a deep wound for what the Soviet authorities did to the Ukrainian people during the Holodomor genocide in 1933. The regime in Moscow murdered 7 million Ukrainians through famine. Stalin stole the food to prevent a famine in Russia, to make communism look like it worked.

I know many readers might wonder why I’m taking such a strong stance on this issue. Let me explain.

It’s because I’ve spent a long time studying and teaching history. I’ve seen how world wars started in the past, and I know what the playbook looks like to get them going.

Western governments are rolling out the playbook. They’ve provoked Russia into invading by preventing Ukraine from following the Minsk Agreements. That gave Russia a justification for invasion. Now NATO is provoking Russia to do something stupid like use a tactical nuke by running weaponry into Ukraine.

All of this chicanery is being carried out by politicians on behalf of the interests they serve. Even the neocons in Washington driving the whole agenda have paymasters.

But they won’t die when the war kicks off. They’ve got bunkers and security details and cozy beds in their harbourside mansions to keep them safe and warm.

It’ll be the diggers who die. Again. Likely many of us will perish too because the combined might of Russia and China, alongside the military technology available today, will lead to death on a scale unseen in history.

Whoever wins, we all lose. Except the billionaires and their puppets.

Afterwards, when we have remembered to say Lest We Forget again, politicians will again crawl back into the Anzac Day services and appropriate them for the next war.

We’ll fall for it, too, because we normal Australians just can’t imagine that anyone could be so evil as to wish genocide upon their own people.