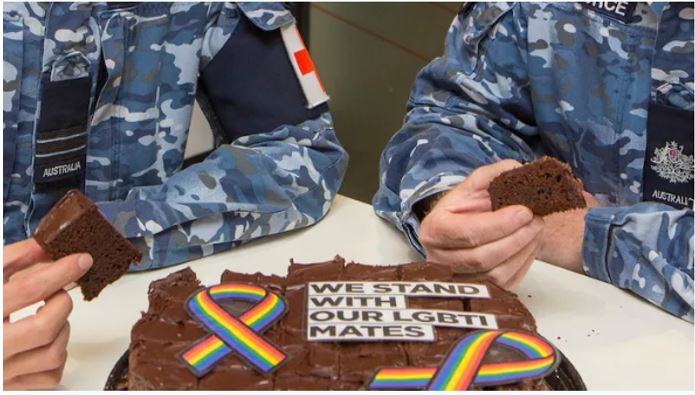 It wouldn’t surprise you that I am not a cowboy, dear reader. My father had been a bull rider in the Territory back in the day and wanted me to do poddy calf riding, but it just wasn’t my thing.

Now even rodeo has been appropriated by the rainbow brigade.

Then they came for the cowboys and I said nothing, because I am not a cowboy.

Unfortunately, too many people still view the rainbow agenda as mainly to do with homosexuals. It’s not. That’s a front. Just like BLM is not really about blacks.

If someone wants to go be gay, fine. Whatever. Just not in front of my kids, and don’t call yourself a Christian at the same time.

The rainbow agenda, however, is not first and foremost about the gays. It’s about something far worse.

Readers by now should be familiar with cultural Marxism and the Frankfurt School. It will be taught to every child as a cautionary tale one day.

Most Aussies, though, still have no idea what communism really is and so will be shocked when the final crisis against Marx’s minions kicks off in the not-too-distant future. They think communism was just famines in the 30s maybe or missiles in Red Square in the 80s. They think communism died out at the fall of the Berlin Wall.

Not at all. The ideology of communism is much stronger now than it was in 1989.

Communism is more than just an ideology even, although it expresses itself through them. It is a spirit. You can see it throughout modernity when you read the writings of anti-social, elitist intellectuals who hate this world that doesn’t acknowledge their genius sufficiently and so want to burn it down and make it again anew. It’s all through Rousseau, Marx and Engels of course, the French Deconstructionists and anything written by an academic since 1968.

Communism is the political expression of what the Bible calls the spirit of anti-Christ; the force at work in this world making war against all that is good and wholesome and decent. If Christian hot-takes aren’t your thing, just think of it as a philosophy that attracts and weaponises broken people to make them hate and destroy all that is good. A glitch of human nature.

Communism is a political cult that weaponises spiteful mutants to overthrow the existing structures of society. These useful idiots, as Lenin called them, expect to then take power and get subsidised by the state to make sustainable zero-carbon beanies from activated lentils on the five-star collective commune.

When the crisis is triggered and the revolution occurs, they get shot only shortly after all the people who held the previous social order together.

The overthrow of the existing societal order creates a social, cultural, economic and political vacuum. Into that vacuum step thugs. Every time this utopian political cult has catalysed a revolution, a gang of psychopathic criminals has emerged as the new ruling elite.

The Chinese Communist Party are a pack of depraved thugs. The Khmer Rouge were thugs. The Tupamaros in Uruguay were thugs. The Sandanistas are thugs. And while many of us remain sympathetic to Russia’s reasons for invading the Donbass and getting rid of the Nazi Azov thugs, the blokes running Russia today are still largely the thugs that were in charge during the USSR.

China and Russia are forming a military axis against the West, and the political and military leaders who will be sending their boys to go and kill our boys or their missiles to go and burn our cities made their way up the social ladder as communists.

We don’t just have communist enemies on the outside, however. When you read Klaus Schwab’s ideas and examine the agenda of the World Economic Forum, it’s apparent that it’s just another form of neo-Marxism infused with technocracy and some very creepy eugenics.

It’s never been satisfactorily explained how Klaus Schwab got so powerful. The guy was an academic and an engineer. A nobody. His rags-to-riches tale is even more ridiculous than Jeffrey Epstein’s. Who makes these people so rich and powerful that heads of state and CEOs kowtow before them?

Our education system was turned into a communist indoctrination machine decades ago by cultural Marxist intellectuals. Now we have communists in positions of power across Western societies.

Fifth-column international communists like Tanya Plibersek and Penny Wong signed onto the utopian political agenda in their youth, and have probably lost their zeal over the years thanks to their fat salaries and juicy perks. They’re doing everything they can to help China win the coming war – climate policies, open borders, educational dumbing-down, economic vandalism and cultural demoralisation. They probably think they’ll be rewarded with cushy jobs in the new global hierarchy once Western capitalism is done away with.

They’ll be shot. Communists are gangsters, and if there’s one thing gangsters despise it’s disloyalty.

The people who live under communism don’t like communism. It’s a dehumanising and brutalising social system, and most humans just want to get married, raise a family and have something at the end to pass on to the kids. Communism distorts society so profoundly that the honest and decent stay miserable and only the social predators rise to the top.

No one will die for communism. Stalin found that out in 1939 when Russian forces began surrendering en masse to the advancing Germans. The Soviet government’s messaging then shifted rapidly to focus on fighting for the motherland in the Great Patriotic War. Ideology became the servant of patriotism once the ruling elite sensed their vulnerability.

Russia and China have both already made this shift. Both have been pushing nationalist messaging for the last few years to get their youth ready for the necessary sacrifices in World War III.

Alexander Dugin, son of a military intelligence general and beloved Rasputin for the alt-right, works hard to convince Western dissidents that mother Russia is the only hope for fighting against the globohomo agenda.

In October 2019, China staged a Cold War-style military parade to mark 70 years of CCP tyranny in the Middle Kingdom. Coincidentally, right around the time the biological weapon COVID was released.

They’ve been pushing anti-Western and chauvinistic messaging in movies and online content ever since.

These are the ideological shifts great powers make just prior to global wars.

Russia and China have spent the last few years juicing up nationalism so the people go and die like they’re told when the fighting starts.

At the moment, the ideology the Western deep state is going with as we head into World War III is that we need to send our sons and daughters to fight and die for gay multicultural events, late-term abortions on demand and childhood gender reassignment surgery.

Someone needs to tell them that isn’t going to work. Will they try and pivot to nationalism once tactical nukes get thrown in Ukraine or a hypersonic missile takes down a supercarrier in the Western Pacific?

It’s hard to see how they could. They’re in too deep. All these people know is ideological utopianism.

Western societies are sick and deluded, but that doesn’t mean our kids and grandkids deserve to be slaves under communism.

That’s what’s coming once we lose. Our elites are so overconfident they can’t even imagine it would be possible for the West not to win World War III. The Western oligarchs clearly think they can win a two-front war against two nuclear powers and then impose the full vision of their woke globalist tyranny on the irradiated ruins of the world in the aftermath.

They’ve had it too good for too long and they don’t know anymore what it’s like to lose. They don’t know the sting of humiliation. They’ve forgotten what happens to people who lose world wars.

Unless the West has a radical shake-up and returns to political reality quickly, we’re all going to be educated soon enough.