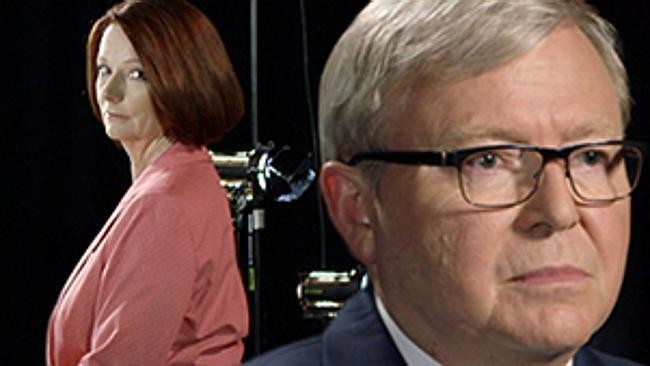 Last night I had mixed emotions. Having watched this final episode of the train wreck that was the Rudd/Gillard/Rudd “Gumments”, one wonders how the Labor Party could resurrect anything remotely believable or usable from the upturned bodies, the disengaged axels and the spinning wheels at the bottom of the deepest canyon the ALP has ever descended into.

The British MP that Gillard brought in to assist with her campaign summed it up when he said he had never seen (and I paraphrase) such carnage from such promise. "How could they trash the permission in just 6 years?" he asked. He had never witnessed such a thing occurring in any country anywhere in the world.

The vision was comical in that we were watching the endless marches of solidarity to and from the caucus voting room with the rearranging Labor heavies, one minute with Rudd, then with Gillard, then back to Rudd. Those who put their money on the wrong horse of the day were voted out. Except Kevin.

And therein lies the root cause of Gillard's problem – the problem that would destroy her tenure and ambition. Like a reoccurring cancer which, despite bouts of good health, just won't stop showing up on the X-ray. Kevin bloody Rudd. The black shadow that heralds the ultimate doom. In fact last night's episode was called 'The long shadow.' Very apt.

Gillard had the opportunity to remove Rudd from the Cabinet table but decided that showing him some leeway might shore up a few votes and make her look motherly and soft. Had she been a harder-nosed bitch at the time – the very word that started the misogyny rant – she could have thrown Rudd into the urban wilderness, unable to campaign and feed people like Laurie Oakes with juicy snippets to get his pulse racing. He didn't even bother denying it.

The bottom line was that Rudd was never going to languish on the back bench for long. He wanted the Foreign Ministry because it gave him the two things he needed. 1) A stage to campaign from and, 2) the opportunity to spend loads of time out of Australia and away from the shit fight that the Gumment had become.

Remember that on top of all the crap concerning boat people and “there will be no carbon tax under….” – Julia now had a Judas of a speaker whose sexual proclivities were all over the media and were the vilest imaginable and a minister in Thompson, bending the truth on spending his heart out in the arms of whores and any other hedonistic whim he fancied. (Funny – we see in the news today another Union which demanded money from a major company for strippers. They don't aim very high this lot. So much for the free opera tickets.)

Kevin got the gig of Foreign Minister because Gillard stupidly thought that if she gave him what he wanted he would stop leaking to the media. The leaks stopped but Kevin was in full campaign mode each and every day. While he was in Australia – which wasn't often – he would campaign through the old Labor heartlands looking for photo ops and the opportunity for a Churchill salute. And the people turned on Gillard like a pack of dogs. As one Labor minister put it – he felt like Jesus in Jerusalem in Western Sydney.

Given that the Labor heartlands have a fair share of bogan saturation, the banners got more pointed and downright nasty until one rally where "Ditch the Witch” and “Down with the Bitch” were pretty well the standard fare. Stupidly Tony stuck his head up next to one at a rally and got soundly reminded of it in Parliament by a Gillard desperate for point-making. It deflected the heat for a moment or two. Angry Anderson even turned up to one and proclaimed Julia to be “Bob Brown's female dog”.

But the Labor heavies were busier than a hoard of field mice running into each other's offices looking for solutions, wondering who to back in the Titanic of a Gumment they were part of.

I won't labour over the chain of events here now – God knows we lived through them long enough. But when Julia won the Prime Ministership they said the Convention Centre was like a morgue. Like a badly attended funeral. A stark contrast to the Labor luvies at Kevin's victorious 2007 election win. Sure, she lost 13 seats and had to get into bed with the loathsome Bob Brown who most thought had simply romanced Labor to further his own futile Green aims.

She then secured the independents and one (Oakeshott) predicted that the Gillard Government, “would be beautiful in its ugliness”.

Of course, Kevin's drive to vindicate himself was put by one of his Caucus as “immeasurable”. He took the Foreign Ministry because, he said, “I didn't want to get in the way domestically”. People will remember that his time overseas cost millions and rendered little benefit except to himself.

Kevin provoked Julia and her cabinet, constantly taunting from the sidelines, until he thought he had the numbers. And finally he did. Gillard said of him after his first dethroning that he would be grateful for having the burden of leadership lifted from his shoulders. But it was her in the end that was grateful.

Her final speech after her resounding defeat in the caucus room delivered without a hint of a tear or a whimper. Where Rudd had blubbered at his final concession, she was resigned to the fact that she couldn't kill the little bastard and they had shaken on a deal for the loser to walk away altogether. Which she did.

The remaining members of the cabinet shook their heads and either headed for the backbench or fell on their swords. Or took up employment at a casino. A point not lost on Rudd with Mister Abib.

All in all it was as disastrous a Gumment as you will ever see in two lifetimes. You will never see their like again. Oh, and one little thing that was profoundly evident in the last part of this series… Shorton Brains was behind, or implicated in, every single act of destabilisation. Always there.  Always whispering. Always behind the scenes. Along with Piggy Howes whose face appeared at the rallies and interviews more often than would seem appropriate.

A constant reminder that Labor is run by unions and always will be. Unless this Commission does its job and rules them out as profoundly damaging to the nation.

That is the biggest sin of these three governments, unionism has been allowed to rise again and rear its ugly, unbridled, unprincipled head. Sadly it might take a little longer to rid ourselves of this parasitic band of thugs and robbers who are currently clogging up our courts.

He said in closing that he took no pleasure from the discomfort of others which, if true and he had a trace of dignity, he would not have participated in this series. But he too will benefit hugely from our largesse for the rest of his life… for placing Australia into its worst financial position in living memory.

Goodbye Kevin and Julia. Please for all our sakes, never return. We can't afford the excitement. Or the expense.