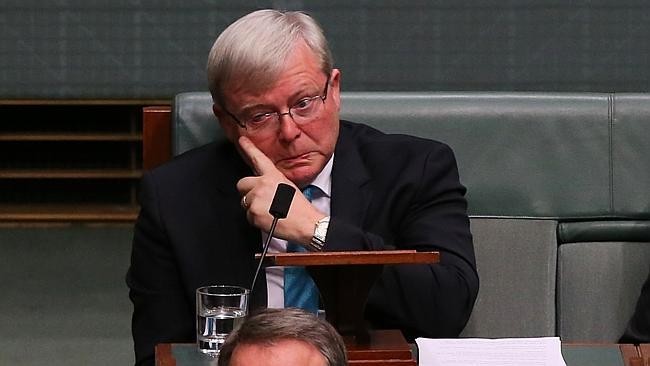 I scarcely know where to start with the 'Killing Season' Part II of the KRudd and Gillard fest. But even if the ABC was trying through this docco series to put some sort of healthy spin on the ALP, they simply cannot, due to the very unhealthy nature of its participants.

They all looked very grubby indeed. KRudd came through strongly as the nasty little control freak he really is and Gillard came through as the white-anting Union-boss lover that she also is. It was a surprising episode as we really saw some real evidence of the 'Real' Kevin. Not to be confused with the 'Real' Julia.

One thing for sure was that Kevin absolutely loved and relished his role as a globetrotting self-appointed saviour. First he 'saved' us from the Global Financial Crisis and last night – he 'saved' us at the Copenhagen Climate Change Summit – which Kevin threw himself into with bluster as a global king pin in trying to keep people talking at the table. His table. Except the really important ones all took off early. As Julia said, 'Kevin dreamed big dreams – which was mostly vanity'. She his humble deputy!

But as Kevin told our penetrating documentary-eer, "I am a human being – just like you!" Wow, we thought he was the Messiah too. But he was referring to calling the 'rat fuckers' out – or as we know them – Chinese people.   Kevin's myriad body ticks all came to the fore last night as well – including his annoying preoccupation with his hair which he awkwardly flicks constantly to achieve what he supposes is the right look for him – the master pollie.

But there were several other annoying 'tells' including his handshake. When the KRudd hand is proffered in all of its pasty limpness, he offers it flat to the recipient, who must contrastingly offer his, flat and upturned, which makes Kev the dominant male. As someone pointed out to me, that's the way Hitler used to shake hands. It is considered bad manners in circles that know better.

Then there was Kev surrounded by his army of aides. And trust me on this -Kevin had more aides than Idi Amin! Trouble is Kevin had to sign off and edit the pants off of everything. He is a man who approaches every document with his biro drawn. Everything needs the KRudd touch. A point not lost on his wonderfully supportive cabinet – as Wayne Swan pointed out there was no political issue which he didn't put his head or his fist into or fiddle with.

Everything had to go past Kevin. Kevin had to sign off on everything. Trouble is when you do that, you get behind with the priorities. As indeed Kevin did. And when the pressure got to him they (Gillard) said that he was losing his marbles and couldn't cope. She was worried about his psychological state in the vain hope, I am supposing, that he was going nuts so she could step up to the plate and take over and give every Emily lister in the world an orgasm.

Then good old Nicola Roxon waded into the feeding frenzy. (I noted for the first time, that she was built like the a Sherman tank below the belt as well – putting Gillard's not unsubstantial undercarriage almost in the shade.) Nicola thought Kevin was a bit of a bully as well as being abusive to his staff. Actually, on the odd bit of footage, you could see evidence of his nasty little ways, so I'm quite prepared to believe that he was everything she said he was. You could see that if Rudd didn't get his way, he was rather good at cracking the shits.

Then we saw Piggy Howes ringing his mates and warning them of Kevin and Dastyari (who had flown to Melbourne for one lousy shot) running round the corridors whipping up rumours like a rodent and finally Shorton Brains making his final political opinion known when he rather succinctly said to his colleagues, 'We are fucked!'  He meant that if they didn't all get behind Gillard, his fellow Union loving mate, the Labor Party was rooted.

And here's the rub. Having spent several months running round shoring up votes for Gillard while Kevin rushed from hospital to hospital and school to school to make his pronouncements ("Are we ready to rock and roll?") and be a leader of the people – "Hello, I'm Kevin" – they got rid of him in one of the vilest coups ever staged only to bring him back three years later. So much for party wisdom!

They didn't mention Gillard's biggest mistake last night.  Her single biggest cock up. Making the bastard her Foreign Affairs Minister.  Had she simply rendered him portfolio-less, he would not have had the opportunity to rise again.  Next week we shall see the rise and re-rise of Kevin Rudd. Evidence that you can get rooted twice from the one stiff. (Forgive me for that one, but it's apt.)

There were a few surprises – KRudd admitting that he had not said one word to the traitorous Swan since his dethroning. Despite being Godfather to one of his kids. Oooh – and another annoying Kevinism – he doesn't like opening his car door. He likes people to do that for him and we will sit there until somebody does.

Basically we were looking at a Gumment that had lost control of everything it touched – our borders, our budget, our health and even our bloody insulation. If KRudd and his dodgy cabinet touched it – it was stuffed shortly afterwards. Pretty well guaranteed.

Can't wait for the final episode. One thing I will give the ABC credit for is the use of highly relevant and unseen footage from the period. Fascinating! Roll on next week.