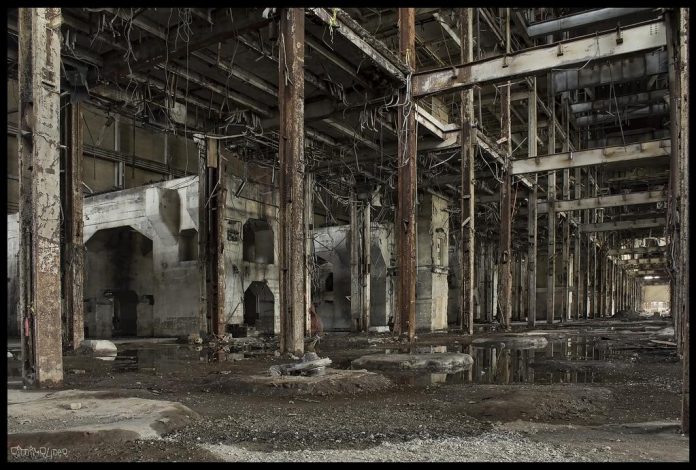 If Australia was a business (it is) – it would be in receivership right now. No self respecting accountant type would let it trade while insolvent for another day. When everything that is coming in only covers the debt interest bill, it would be all over bar the shouting.

I stood in one of the vast halls of a giant Australian motor vehicle manufacturing plant last week. A huge company that employed thousands and had done so for generations – well over 100 years.

I have bought a number of their products which were as venerable as Australians themselves.

Today it is a cold, draughty place with the only audible sound the dripping water from the holes in the roof. Its machines either lay idle or are stripped out for their scrap value. The workers’ lockers remain as they were – their doors left open and swinging with the smell of mildewed old lunches hanging in the air.

A family of possums has moved in, going by the excrement on every flat surface. A huge empty nothing that not long ago, vibrated to the sound of frenetic and wonderful production. And it is a picture that is so commonplace today that the asset realisation experts and demolishers can barely keep up.

The question is – why? And the answer is -Greed! Greed brought about by militant unions demanding more and more until they finally bring an enormous number of once-proud manufacturers to their knees. Unable to compete. Unable to proceed any further.

The workforce, once happy with every EBA their union masters came up with, didn't perhaps realise that one day they would be out of a job and unlikely to find another. So that worked out well didn't it?

So I asked one of my colleagues what his take on it was. Funnily enough, he is just now coming to grips with yet another union EBA demand which will guarantee that any profit that might be made is cut so intensely fine – that if one little thing goes wrong – they are suddenly out of business.

But here's the rub. And this is where 'Shorton Brains' and his union buddies just don't get it. This clown goes on and on about 'edukashun.' We need more 'edukashun' he continually whines in his unsolicited policy speeches. Guess what Bill. We bloody well don't. There are no jobs you idiot.

And this is where the unions don't get it either. In the aforementioned business they employed lots of engineers and project managers – all multi degreed men and women who studied for years and worked hard to get where they were. They had enormous responsibilities. And worked long hours. But the unionists in the same business – from general labourers to machine operators who worked for them – were vastly better off.

An 18 year old kid can walk in off the street and get a job as a general site dog’s body with little or no education and he will earn $5 an hour less than a multiple degreed engineer who has six years of education and 20 years of work under his belt. So the engineer feels a bit cheated and the unions rub their hands together because the gap has closed.

They hate bosses as part of their charter. The war against the bloody elite university bred bastard bosses is being won. And Shorton Brains wants every man woman and child to go to university? Surely he wants them to be turned into socialists and not to gain any usable knowledge for which few jobs exist.

Today this great nation of ours does not produce a car – something it has done since 1925 or thereabouts when Henry Ford built his plant at Geelong and Holden built its headquarters at Fishermans Bend.

Our oil refiners have all but all closed down. It's cheaper to bring it in from Singapore in a boat. Thousands of jobs lost. Alcoa viewed Australia as a great new hope and opportunity in the 1950s – and today its plants are being torn down and recycled. All jobs are gone.

And that's only a few notables from a very long list of closures.

All we had to do was not get too greedy and keep working. But when you force wages through the roof, things happen. Profit margins drop to nothing. Other countries that are not as greedy put their hands up to make the same stuff.

Real estate, food and utilities go through the roof to keep up with the high wage demands and the whole thing descends into a cycle of decline that leaves the place up to its arse in debt with no jobs. A commercial wasteland.

Australia is now seriously rooted and the Libs are again trying to save us from complete disaster. Only this time they don't have a fighting chance. When Global businesses don't support a country – it's all over bar the shouting.

Meanwhile our unions and Labor leaders have been making hay while the sun shone. The union bosses – so awash with the subscriptions and donations of their members and 'partners' – have been partying big time. Millions have been squandered on everything from property to prostitutes, some have fallen by the wayside like those in prison, while others hunker down hoping to Jesus that the Royal Commission will not see their names on anything.

Our former Labor leaders – having thrown our money around like it was petty cash – now reap the benefits of their wages. Rudd – the cretinous little Narcissist now resides near his new power base at Harvard working on US/China relations. Some sort of study that is redundant even before he formulates it. And utterly irrelevant to Australia – the place 'he loves so much'.

Gillard seems to be permanently on the campaign trail for Hillary Clinton – although God only knows why. Something about America having its first female President which she trail blazed and should therefore be regarded like some sort of modern day Emmeline Pankhurst. God help us! Are they doing anything at all for Australia -the country they pillaged and then basically deserted.

The same country that continues, for some unknown reason, to pay them millions!

Why can't they means test these Socialist cretins? Rudd made sure his family would prosper when he was working in government circles in Queensland. He put all sorts of dodgy contracts his wife's way and she is now worth somewhere in the ballpark of $120 million!

Why then is this man entitled to another $750,000 pa of our money for the rest of his life?

If a would-be pensioner was successful in life- they DON'T get a pension! They have enough! But not Rudd and his crumby family. Gillard wants to work at a university she gave $100 million to – unchallenged. So let her work. She's young enough to make a good living for the rest of her life. Why do we reward her massively after she and her cohorts sent us broke? When are we going to realize that this system – this way of doing things is unsustainable? When we are all living on the streets?

Trust me folks – that is yet to come. But it will come. There is no other way. Miracles can only be performed where there is a pulse.

And Australia is currently in a Socialist induced coma.