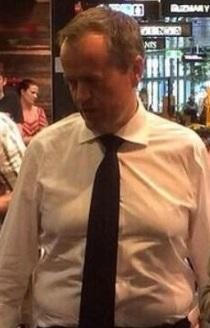 Today – despite a week full of paedophile enablers and deranged beheaders wanting to come back to the comfort of Australia due to a lack of decent food, TV, nice beds and warmth where they are beheading people at the moment – I am a happy man!

Shorten – the latest Labor waste of space – is starting to play his aces. Like most Laborites he is prematurely ejaculating, but no matter. Ejaculation is something they know about. Just ask their latest leader.  And I mean the transitive verb to exclaim something suddenly and usually forcefully – of course. (Without reason.)

But the man is sagging in the polls and is signing his own death warrant. This will be his swan song before he is unceremoniously dumped for the next Labor social vandal to take his place. They have a lot to live up to after the bar-setting Krudd and Gillard era which has left Australia so deeply in the red that most of us will never see black again. Never before has black been such a glorious colour. Sadly these days, it is a colour too far.

Bill's 'powicies'  are pouring out of him. Mind you – I don't get it. This bloke is no economics mastermind – he was a professional union thug. He banged heads while he peddled his Marxist mantra for a living. When the Tasmanian gold mine disaster happened – a little light went on in his mind and he rushed there to flaunt himself and get his expanding forehead on telly, like a Women's Weekly scribe at a royal birth. And didn't the bloody Labor Party react exactly as he wanted them to… they slotted him into a seat in Canberra.

Now he sees himself  as some sort of economic saviour. I remember his bagging of the 2015 Budget before it had even been released, with Bill walking around Parliament House yelling – "Bad – bad – bad  budget".  Call me spookily old fashioned and a man who has to have budgetary things explained to him in plain English, but I really expect a more informed and reasoned response to an impending budget than 'Bad – bad -bad!" This is not good – good- GOOD" I said at the time.

Then he got real and said – wait for it- "the government is spending more than it is earning." WHAT! He must have recognised this trait from the very government he was part of for seven years. But it's a bit bloody rich isn't it? It's a bit like Julia Gillard counselling girls on sleeping with union thugs. As the Australian Newspaper said at the time "How could the Labor leader utter such a phrase — as a criticism — of the Coalition? It is like John Singleton giving us a lecture on luncheon etiquette."

The Aussie went on to say, "The federal government is still borrowing, alarmingly, with the debt increasing by $96 million each and every day”.

This, rather obviously, is a serious dilemma that needs to be fixed. But as Joe Hockey pointed out in his budget speech, this is already $37 million per day better than the situation under Labor — an improvement of more than 25 per cent.

Over its six years in power Labor saw revenue increase by $65 billion but increased spending by nearly double that, or about $125 billion. What’s more Shorten has attacked, blocked and frustrated every substantial measure the Coalition has put up to curtail government spending. Shorten is like the firebug who joins the firefighters at the scene — and critiques their efforts."

So guess what Bill is going to bring back if he gets in next time. Carbon tax! Bloody carbon tax! Can you believe it. I'm not kidding – it's in the paper today. The man is obviously a political genius. And he's going to go 'soft' on the boats too. The people smugglers will be back in business. Brilliant Bill!

Oh, and he wants a superannuation tax and will probably bring on the mining tax as well. And let's not forget his mates at the CFMEU who, along with their brothers and sisters in other unions, will be allowed to run amok. I mean look what they did in six short years when their mates got in last time. The courts are still clogged with their cases of corruption, thuggery, embezzlement and thievery. They are exposed for the rotten, thieving bastards they really are. You can't argue with facts can you? Surely not!

Bill, let me help you with your policies. These will guarantee you the big seat in Canberra Pal. Pink batts in every Australian home. I'll even give you the line to massage your Labor faithful Bill:  "No Australian family – will live in cold – by 2020!" Brilliant!  Also BiIl, don't forget to get to the heart of your Education system – all those lovely Labor voting teachers and kiddies with impressionable minds. "No Australian School will be without really big assembly halls and classrooms waiting to be filled… by 2018!" Oooh – and "No Australian child will be without a computer by 2018!" Christ Bill, I can see the victorious red banners waving right now!

And Bill as the piece de resistance in your policy portfolio – let me lay the biggie on you that will absolutely guarantee you success at the next election. "No boat person will be refused access to our country by 2020!" Sorry Bill – the hairs are standing up on my forearms with that one. And the clincher Bill – the one that will release a whole new raft of votes just for you – "No Australian Muslim will be without a mosque by 2020!" Christ – I'm getting downright emotional now.

Get out there Pal and deliver that lot! Victory is yours!

(You can laugh, but sadly, 40 something per cent of us will vote for this prick. Can you believe it!)