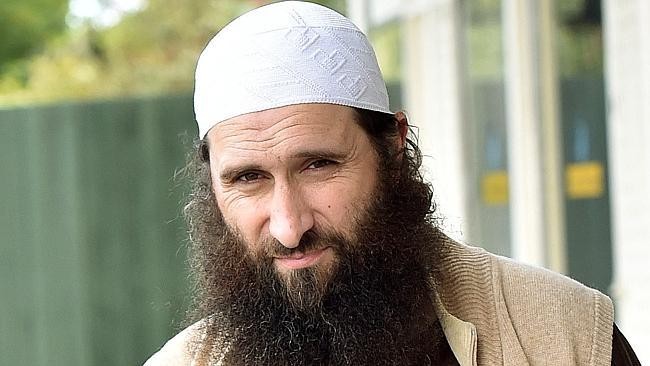 Two lots of scumbags. Two different worlds. Same bottom line- they don't respect Australia and Australians. Picked up the paper today and read it on the pavement with my cheese toastie and cup of chino.

The first story centred on Harun Mehicevic (pictured) the leader of the 'Al-Furqan Islamic Information centre' in Noble Park in the east of Melbourne. Once an average working class suburb, Noble Park is now becoming a Muslim enclave. He has the endemic arrogance of his 'type' – strongly evident in his manner and the way he talks to Australian people. He wears a Muslim 'frock' and skull cap and caps it off with brown socks and K-Mart brown vinyl shoes. His beard tells you what sort of Muslim he is. The nasty sort.

As the story says, stick a microphone in this bloke's hand and the hate-filled vitriol flows. Despite finding a peaceful home here away from his war torn Balkan homeland, and no doubt supported by you and I while he found his feet and his voice, he now hates Australia. The 'Al-furkin' Info centre and bookshop has given him his reason to be and he lectures the Muslim youth of the region about what they should think and act on. This is where the kids who were recently arrested all hailed from.

This bloke doesn't call us Australians. He calls us 'Kuffars' (the equivalent of calling an African American a nigger). This means unbelievers. "Australian values are the values of the Kuffar", he says. "Your religion is not their values. They will not stop fighting until you give up your religion or are martyred", he told his followers.

He told them not to take the oath of citizenship pledging allegiance to a 'Kuffar government'. "Be careful what they ask us to say. There is no bayah (pledge) to Kuffar (unbeliever) We can only give a bayah to a Muslim leader", he says.

"The Australian flag should be a warning to you that you do not belong here. It is a flag of the people of the cross." He then ends all of his 'Al-Furkin' sessions with a prayer that says -"Allah will help the Holy Warriors establish an Islamic State where Muslims can live with dignity and honour. Allah created paradise for Muslims to be rewarded and hell for the Kuffar to be punished."

So there you have it my fellow Kuffars. In a nutshell. Scumbags. Who the hell let them in? If the Aussie flag is a warning that they do not belong here, then what the 'Al-Furkin' hell are they doing here? Get out! Go where you reckon you belong! We don't want your 'Al-Furkin' values here!

Then we move on to the CFMEU. Also a nasty bunch of pricks as it turns out. There are several court cases on at the moment that may not get a passing glance. While these buggers are not religiously based,their mantra and dictums have the same sounds as one. Their "Touch one – touch all" T-Shirt slogans have the ring of a bikie group or something.

They make out it is a long waging battle when in fact if you talk to any of their once loyal followers in the Howard years, they were delighted with the Work Place agreements they themselves had put in place with their employers. I know. I asked several of them at the time. By working out their own deals they had effectively made unionism of this type, redundant. A toothless, useless tiger.

But seven years of KRudd and Gillard paid them back handsomely and they were free to roam our cities looking for things to picket and jobs to stop.

But the shit hit the fan for them this week in court. The CFMEU and its office holders Danny Berardi and Shaun Reardon were ordered to pay $43,000 in fines. Apparently they walked on to a building site and attempted to force the developer to sign an enterprise agreement. They then went to the workers on the site and said, "You're not doing any work today – pack up and go home." Mr Berardi then threatened the developer that he would stop work on all their other sites. "You'll be f***ed – I'll block all of your sites", he said – obviously calling on years of experience in sensitive negotiations.

The somewhat intimidated site manager then rang the CFMEU Assistant Secretary to complain about Mr Berardi's threats and was told by Mr Reardon, "Why should I help youse and change Mr Berardi's direction? You shown (sic) the CFMEU no respect!"

The subsequent blockage cost the developer thousands and delayed the project for a week.

One thing is for sure. The CFMEU is racking up some hefty fines lately – which must be coming out of the same cash cow that funded Gillard's former home and her boyfriend of the day, as well as all of the clowns in jail or under investigation in the HSU at the present time. The poor bloody union members.

Nice bunch of pricks these Union heavies. One day however they will have nothing to picket and nothing to boycott. People will just stop building stuff in Australia because, like the car industry, it just isn't worth it. Then with no subscriptions, they will simply peter out… no doubt stealing the last few shekels from the bank accounts as they leave.

If we could just pack all of the militant unionists and the hateful 'Al-Furkin' Muslims on to boats and start a reverse trend, we might just have a chance of saving this country.