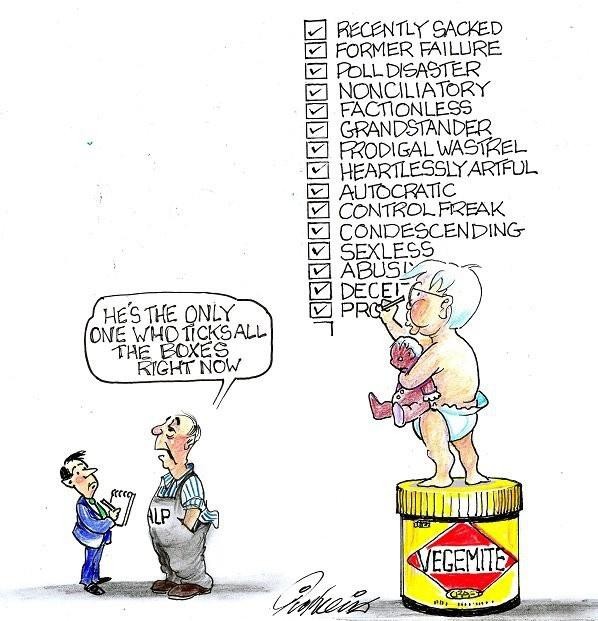 I am neither a Twitterer nor a Face Booker. Can't see the point. Don't have the time. Not really interested. Unlike the Kruddster who, having just rolled out his latest manifesto which he boldly calls "My Harvard Report", is flat out twittering about it on his Iphone. Or is that iPhone? No matter.

I am a torn man if I'm to be totally honest. Part of me wants to watch KRudd get this job he seethes with desire for although, as Latham points out, for him to simply wait for Ban Ki-Moon to run out of tenure time is not the way KRudd likes to do things. He likes to depose people. He likes to campaign with lots of selfies. And leakages to Laurie Oakes.

I'm torn because part of me wants to watch him completely root the UN, which he will do in time if allowed to play with it, and the other part of me wants to write to the Burghers of the U.N. and tell them to let the little prick in the door at their own peril. The man by his very nature breeds disharmony and complete confusion.

KRudd amazes me. Completely gobsmacks me. He is fitted with no remorseometer nor does he even seem to flinch at the trail of jetsam he leaves in his wake. He has moved on to his other important 'assignments.'

His latest aforementioned 'Harvard Report' or 'MY Harvard Report' as he calls it, is titled 'U.S. China Relations' and is a response that meets the need for 'A common strategic narrative' he says. Now he represents, in his own mind, the U.S. He was seen on the podium at the JFK School of Government the other day waving his hands around while delivering his 'common strategic narrative'. No doubt with a bit of 'programmatical specificity' built into it.

KRudd is a phenomenon. Unable to lie down and be happy with his taxpayer funded stipend which endures for the remainder of his wretched life, he needs recognition – something Australia could not give him – he wants to be seen – he wants to be quoted – he wants a shiny desk and a grand title and more importantly – a podium where he can deliver his unintelligible manifestos to any audience that will listen to him.

Even Keating, to his credit, is not too fussed about whatever cockups subsequent 'Gummints' are doing as long as he can rake over the embers of his vitriolic speeches and big picture predictions in print, entirely surrounded by French clocks and antique furniture. He still wears a tailored suit to work every day which, in the Australian context, is a bit weird.

Swan meanwhile is obviously relishing the release from that confusion of number of things and hasn't uttered a squeak in months. He's still coming to grips with the 'World's Best Treasurer' thingummy they gave him – although he doesn't quite understand why. Surreal!

Hawkie is quite happy to get the odd celebrity nod with cooking shows and radio spots but is rarely seen out unless he's going to a funeral these days. I'm sure he blanches at KRudd's hysterics.

Gillard meanwhile is laying low lest they ask her any more questions about stuff she did 17 years ago and praying to Jesus that they don't. You can only perjure yourself so many times before it sticks and the truth tumbler drops you in the shit. So she now restricts herself to sending "You can do it Girl!" texts to the likes of Hillary Clinton. And watches as $700,000 rolls in every year for what really adds up to stuff-all worthwhile work in her controversial lifetime. She did it all right! And with some perfectly dreadful people.

But back to KRudd. The trouble is, and I'm talking to my friends at the United Nations here, this bloke might look like treacle with his little white hands, the hands of a pastry (pasty?)chef, but his love of ridiculous minutiae is so endemic in his makeup that he will blow a gasket at a moment's notice.

And God knows we don't want a Secretary General of the UN calling the Chinese 'Rat Fuckers' in a paroxysmal moment when he is trying to inject some 'specificity' into his speeches which will also have to include his vague and desperate grasp of their language. Because that is what he did in one unguarded moment while PM.

Don't let the little prick anywhere near the place!