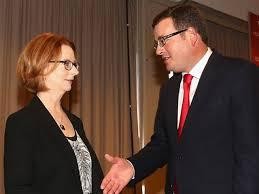 One thing I'll say about the Rudd/Gillard 'Gumments', they provided extraordinary entertainment. As the country plunged deeper into the abyss and became an international comedy show, our gobs were smacked daily with each new revelation and bungled power plays. Sure they plunged us into the Mariana Trench of debt which most of us will never see erased, but they were so bad, they were comical. The Laurel and Hardy of the political set.

But this morning as I look at a map of Victoria cut up into the colours of this election with its huge bands of red plastered across every working-class city and suburb, I see we have become a land of, not lower middle-class ordinary working folk or landed gentry, but a rabble of whining tattooed losers who hate the blue bits. (I know this because I recognised the Labor rabble handing out how-to-vote cards at our polling booth – they all had tattoos – even the women, and I know for a fact they are all on the dole.) It's a small town.

History again spells out that nice blokes don't win. Bastards win! The Labor mob have filled the double page letters to the editor with promises that Queensland is next. As no doubt it will be.

So Victoria is today looking at a shopping list of stuff that is largely un-costed and hugely expensive. Billions of dollars rolling off Dan the Man's tongue like it was just dollars and cents. Stuff to appease the massive raft of people who are hugging trees, still going to uni, are over-qualified and on the sausage roll.

One of the first things that will happen is that Dan the man Andrews who has never had a commercial job in his life, you know the job I'm talking about, the one where you work hard, hopefully make a profit and employ people. Not our Dan ‘tho – he's worked for the ALP his whole working life, starting out as an organiser. What an organiser does in the ALP I don't know, but obviously they must be in a mess most of the time to need one. Well, anyway, our Dan has rolled his sleeves up and made a list.

He is wiping out the new freeway tunnel which was designed to link one freeway to the other main artery. See… the trouble with freeways in Melbourne is that they all end in suburban streets. Five lanes suddenly stop at a traffic light in a Labor seat. So it's a shit fight getting to work. If there's a bingle, it can take you half a day. If there's two bingles, you might as well drive home again. Except you can't turn around.

So Dan is wiping the already awarded East West link and it will cost him $1.5 billion to stop it. Lend Lease will still get their money though. And the handful of Labor voters who have a single front terrace home with a postage stamp back yard and a few motley gum trees, currently being hugged to death by Greens voters, will survive.

Dan reckons everybody should go to work by train. Even the delivery drivers. But not the politicians, they have cars. So he's wiping out level crossings. I don't know whether any of you know how hugely expensive it is to separate a train track from a road. You have two choices… over or under.

Add unionists into the mix and you are talking megabucks! Or as they call it down here, ‘Treasure Island’.

Then there's the Tulla Freeway. Despite billions of toll dollars going mostly off-shore every year from those who use it, to those who actually own it but don’t use it, this was a cockup from the previous Labor State Gumment. Again, the old five lanes going into one lane at the end trick. The Tulla is an extension of the main Melbourne freeway, the South Eastern. Trouble is, in the middle it shrinks to ONE lane! Can you believe it? This causes tailbacks that go for miles and for hours. Anyway, that is a small project in the scheme of things, a pissy 300 million dollars. He wants another half a billion to fix the Westgate too which spends half its life choked in the smog of stationary traffic and boiling radiators.

The tin lids are laughing though. Those who are poor get all their school uniforms given to them by the Labor Gumment. Noice! Must piss off those parents who worked two jobs to provide the same thing though. Dan is also giving the kids $146,000,000 to learn to drive. Presumably on the freeways that don't move.

Then, even though Kevin rebuilt all the schools three years ago with useless meeting halls and multiple gymnasiums with pink batt insulation and empty class rooms, Labor has gotta do it all again! $560,000,000. Bargain! And Dan is bringing back the bloody technical colleges too at a cost of $320,000,000 despite the fact they mostly have folded due to a lack of interest and a scarcity of jobs for anyone graduating.

Hospitals cop it large too. Soon you will have a heart attack in Victoria, probably right after you get your water, power or rates bill, and they will have a thing called a bed for you. A snip at $556,000,000!

Coppers will be inundated with Gumment money as well. As will the Ambulance drivers who, despite earning on average $100,000 per year with two and a half months' leave, will now see their salaries go stratospheric. He'll also sack the Ambulance Board so the union can run the joint. The Nurses’ Union, the Teachers’ Union and the Police Union are rubbing their hands together too… the precedent has been set!! Yippee!

Apparently the unions are already on Dan's doorstep with their claws out this morning. They all have claims. Even the fire-fighters. Funny that… they had a radio program about them last week, four days on, four days off. If you cop a night shift, which they do every fortnight, you can get a good sleep. So most have another job, maybe two. Gee I wish I was a fire-fighter. Pity the poor bastards in the bush… they’re all volunteers.

So while dear old Gentleman Denis Napthine wanders off to the back bench for a while before, I will wager, returning to life as a country vet in disgust, Dan the man is unfurling the Labor cheque book like a Eureka Flag this morning. One thing is for sure though, not too many Labor or Greenie voters will have to put their hands in their pockets to pay for it all.

They like to leave that to the rest of us.