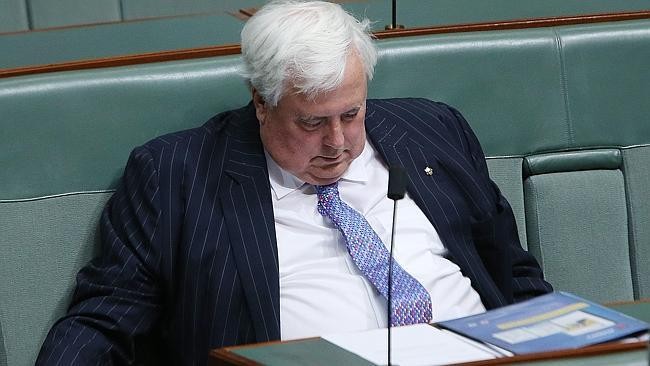 I know some of you think I'm a bit of a 'Merchant Banker' but when it comes to people I'm rarely wrong. This is what 60 odd years on this earth does for you. You finally get the wisdom.

I've had a good look at Clive Palmer. I've studied the bastard from all angles and in all situations, which we can do these days with the help of wonderful mediums like You Tube. And the bottom line findings of my in-depth research is that Clive should NOT be where Clive IS! He should not be at the tiller of big business and he most assuredly should not be in Canberra.

If Clive belongs in Canberra my friends, then I belong in a very big brain surgery theatre with lots of knives and things that go 'beep'.

I will also say at this juncture that Lambie does not belong there either. In a commission home in Tassie maybe or running a drop-in centre perhaps, but not running anything – even a desk – in Canberra. Why you ask? Coz the bugger’s well out of her depth. Anyone who says "I wanna be 'Proime Minster' of this country", having been in the place for 5 minutes, should be given the widest berth possible. She should be avoided like a Baptist spinster aunt wanting to warn you about boys.

Clive I'm afraid is just a big wobbly buffoon. In fact if you looked up the word 'buffoon' there would be a picture of Clive beside it. Everything is wrong about the man. From his wardrobe to his gait. His eyes are all wrong. His speech is all wrong. His stomach is most certainly all wrong.

His wife does not even look right with him. And he cannot sustain a stream of thought and put it out there coherently and succinctly. Plus, he uses his own language. I mean by that, words he has made up himself which appear in no Concise Oxford. This might work well in some places but it doesn't everywhere else. Clive is a bumbling, stuttering blusterer of a man I'm sad to say. And as such he should not be in Parliament.

Everything about Clive is wrong. He proved he can't even turn up to Parliament House in his own car and get away with it. Why? Because any serious politician wanting to make a point about doing away with 'Gumment' Comcars would have the common sense to turn up in a Holden or a Ford, or even a Toyota or a bleeding taxi. But not a bloody great big old Rolls Royce with him sat in the back seat looking like John Kerr. Which I might add broke down at the front door and the driver had to jack it up for half a day – much to the amusement of the Gumment car drivers.

Clive cannot even sit in Parliament and get away with it. He goes to sleep. With his tie to one side and his belly hanging out. It's a bad look to sleep in Parliament when you are earning heaps from our sweat and confidence in you. We expect our pollies to at least be alert for Chrissakes. But not Clive.

The other rather unnerving thing about Clive is his business. While the Chinese don't trust him after his gaff about invasion, I think they are probably justified in their rather harsh assessment of him. Clive is unnervingly dodgy. The original Dodgy brother.

Clive doesn't have a face you could trust. And his sales spiel is wonky. I want you to remember I said this, but I have a feeling deep down that Clive's world is going to come tumbling down one day because it really was all smoke and mirrors. The billions will ‘poof’ into a red bank balance.

Looking at 'Cloive' is like looking into the eyes of a Russian oligarch. OK until the bastard smiles and you realise that above the Saville Row suit he has a 24 carat grill, the desired impression of corporate greatness ruined by the Vodka laced gangster grin.

And then there's the resort. A screaming success he says – a critique not shared by its employees who say the place hasn't seen a minibus full of guests since… well, before their time. See, nobody wants to stay at a place where there are plastic dinosaurs all over the place. You look out at the Coolum Greens and there's a bloody great Tyrannosaurus Rex grinning at you from behind a palm(er) tree. Nuts!

Oh those words. Yes. Well, try these on for size… delivered during his fabulously frenzied and dyslexic election campaign which, with 'Cloive', hasn't ended yet.

Clive's mangling of the English language transcends even Joe Bjelke Petersen's whose mastery at stating the unbelievable set an enduring benchmark at the time.

In one paragraph of a speech he said "I am standing to be the next Prime Minister of Australia." And then in his next sentence said, "I'm not doing it to become Prime Minister", which hopefully went right over the heads of the Clive supporters.

There's not a lot of difference between a 'Cloive' supporter and a Hansen supporter. He went on to say in another unsolicited moment when the cameras were on, "Now is the time for Australia to claim back itself." I'm not sure I get that one to be honest. Clive is the only man I know who speaks in typos. "You should not be too detached to property" was another gem followed by, "That's what happens to Corpany (sic) Directors."

Asked what he thought of the reportage about his ongoing tenure, he said, "The 'storings' get boring and boring every day." Beautifully put don't you think?

I haven't mentioned the Titanic. Why? Because like most things with Clive, it is plain nuts. The Titanic, Clive, was a disaster that killed 1517 people. Which is why it is still where it is. A grave site. Why would anyone announce an intention to build a replica of a riveted marine failure which was, up until that time, the worst marine disaster in the free world and believe that the world would pay huge money to be a guest on it again…especially in cattle class which he wants to recreate in all of its proletariat classlessness! Like I said – crazy!

So now we have this bloody rabble in the Senate who think it is all about them. Lambie's on a roll but hasn't got the faintest clue where it will end.

The motoring bloke hasn't said a word of any import in three months and 'Cloive' only turns up when the canteen is closed anyways.

Now I know you 'Cloive' supporters are out there. "Righto smartarse" you are asking "when exactly did you know that 'Cloive' was not 'roight?" I remember the moment exactly – as though it had just happened. He was campaigning. Which meant he had turned up at something. A theme park actually. And while he regaled us with 'Cloive' speak interspersed with Nixon-esque thumbs ups every two feet, he shovelled a hot dog and a bucket of chips down his neck while his belly became even more visible, dropping free from the restraint of tortured buttons.

The man is not a pretty eater. But even that didn't finish me with 'Cloive'. That came when one of his aides shoved another 'Family' bucket of fries into his chubby paws for the drive home – a 'traveller' I believe is the term – which he slammed down while trying to end his Ali-like diatribe to a fascinated and disgusted media.  I rolled my eyes. And I haven't stopped rolling ‘em yet.