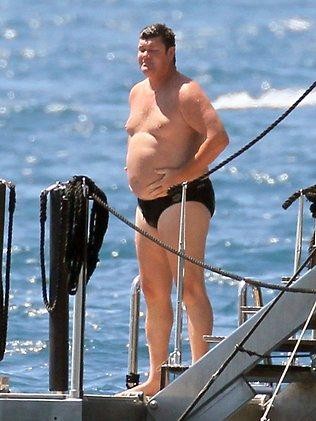 I'm forgetting ISIS and those Labor-ing bores for a moment today to have a bloody great big whine about the Packer empire. As indeed they are doing in the financial pages of every paper in the country this morning. Well James is – to be exact.

"The punters are killing us!" he exclaims. In the world of gambling, this is not how it is supposed to be.

They are supposed to be killing the punters. Indeed – if you win too often at casinos in Vegas- the buggers ban you. They don't like winners. Winning is NOT how it is supposed to be.

But, this fearless new leader has pulled out of all the print and other industry stuff they used to do -the empire having throttled a Bond or two on the way – and now has all his eggs in the one basket. Gambling. Glittering towers of bad taste bling, full of hopefuls all banging away on machines and tables with no real hope of walking out of there with their fiscal security intact.

Playing in Casinos is akin to dabbling in hookers. Sooner or later you are going to have to deal with the legacy.

Now I know that Kerry liked to gamble. The stories are legendary of his wins and losses and tipping where we heard about croupiers and pit bosses having mortgages paid off when Kerry had a good night at their tables.

But – gambling is a dirty business in my book. It wrecks families- businesses – and people. For every big winner- there are 1000 little losers.

Victoria's prisons are full of people who in a former life were bank tellers or managers and who succumbed to the worth-reducing habit of gambling. They started by misappropriating the odd $50 note to devising complex schemes where they pilfered hundreds of thousands -if not millions- from their employers. Then they lost the lot at Crown or Star and found themselves in THE clink with a whole lot of murderers and rapists.

A hell of a come-down. Meanwhile their families are blinking in the wake of the disaster that has now descended upon them as the kids get ready to send themselves to school. With no lunch money. See what I mean?

Well somehow – these blinking punters have somehow gotten good at playing the games that these places offer this year – and have had a lot of wins according to Mister Packer. Which is unheard of apparently. They have learned when to hold 'em – when to fold 'em and when to walk away. With James Packer's millions. And he is not happy.

How can he relax on his squillion dollar yacht in the Mediterranean this year with people winning his money? The poor bastard!

Governments are not about to do anything about casinos – with Sydney being the latest to sign up for the latest version of these glittering, money fleecing, gin palaces which we are told is aimed at the Asian high roller.

If you have the dollars- they have the VIP jet and the free penthouse waiting for you. Objective? Separate you from your Oxford Scholars as quickly as possible and send you back from whence you came, freeing up your table and penthouse for the next mug.

Well, I'm sorry but I still say it is a grubby business. Sure it creates a few jobs-something that Packer likes to rabbit on about – but it loses a lot of people their jobs too.

I have watched at a club I used to belong to – the insidious procession of distraught office workers and public servants trying to figure out how they are going to tell the missus – or more often the husband believe it or not – how they have arrived home on Friday night without any pay.

They shoved it down the throat of a machine that is designed to take the lot by degrees. With promises of life-changing wealth.

So I don't feel sorry for you Mister Packer. You have had it too good for too long.

As had your dad before you.