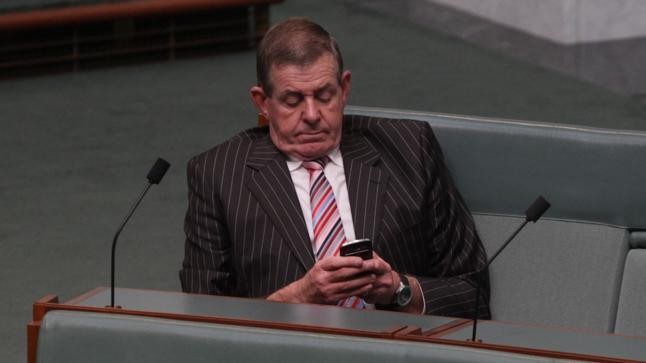 There's an old saying somewhere that talks about kicking a dog when it's down. And today some people are likening good old Slippery Pete to that dog.

His estraged wife came out punching – screaming that Pete's fate today is the result of a Tony Abbott witch hunt.

"He was the hardest working person in the Parliament and has been persecuted almost to the grave because he got in the way of Tony Abbott’s lust for the lodge", she said.

Which has to be one of the most ridiculous statements I have heard over and above, that is, Pete's own text messages. It seems that ridiculousness runs in the family.

She was not finished. "He is an innocent man. He did in his view, and mine, absolutely nothing wrong. He suffers from Aspergers, and has already attempted suicide twice."

He also suffers from a condition known as greed Mrs S, which is not a good look for someone earning a telephone number every year at our expense. The Magistrate, Ms Walker said that he had intentionally filled in the dockets with false information in an attempt to conceal the fact that he was not on parliamentary business. Premeditated stealing. Of course, this was also Tony Abbott's cunning plan.

Slipper is suffering because he has been caught out. He has shown no remorse whatsoever for his offences, other than for the shattering personal effect the public humiliation has had on him. But according to some people, politicians are supposed to get away with things. It comes with the territory.

"His major depressive illness came after the allegations were aired", the court heard.

You can bet that he was also depressed because his potential boyfriend had done the dirty on him and dumped him in it spectacularly, even going to 60 Minutes to spill his guts, which is most likely the reason that his current wife walked the plank. It's a bit hard I imagine, to stay with a man who actually prefers men and talks about your genitalia in the most derogatory way possible.

Let's be clear here. Slipper was and is a grub. His language, his seduction techniques, his lifestyle needs,were all out of kilter with how a politician should be conducting himself. It was as though being the Speaker of the House empowered him to behave exactly as he wanted to.

His theatrical need for dressing up raised a few eyebrows at the beginning too as he rummaged through the old Parliament House wardrobe for something a bit more regal than a tailored suit. He wanted to look like a king. Or a knight.

Tony Abbott had nothing to do with it. This bloke had broken the law. He stole from his  employer and tried to conceal it. It's as simple as that. No conspiracies. No nasty motives because someone is going to be elected PM. He just did some bad things and made bad decisions. Read his text messages before you start heaping on the sympathy Mrs S.

The old boy was a bit of a ratbag who has been caught with his hand in the cookie jar. And it has all backfired rather spectacularly.