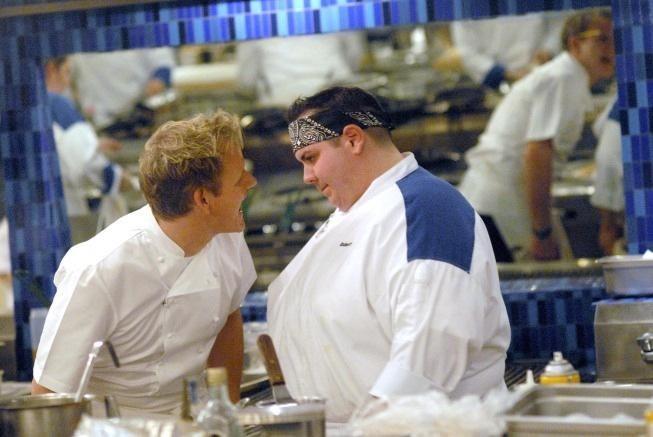 Last night I did something that I so rarely if ever do. I watched an hour of mainstream television. When I say mainstream I mean one of those shows where people vie to cook something better than everyone else and they get all bitchy and teary and the judges bark nasty rude things at them like a nasty old Germanic Reich Marshall.

This has the dual effect of rendering the recipient into a blathering idiot where they lose the will to live and control of their bowels at the same time. Which is bad when you are in an environment that is lousy with sharp things.

Now I blame that idiot Gordon whatsisname from England who, not content with telling people what lousy cooks they are (compared to him), also tells them they are fucking worms. And Pillocks.

While I am not sure what one of those is, why somebody hasn't punched his lights out is beyond me. I would go nose to nose with the bastard if he talked to me like that. He'd be getting my curried sausages well up 'im on the end of a BBQ fork.

Last night's little viewing 'gem' was a bunch of Pommy bakers making bloody buns. All sorts of sticky things that we don't get in Australia. The judges were a bloke who knew his buns and an old biddy with a pearl necklace and teeth like a row of condemned houses and an accent that said, "Fuck off, you're not on my socio-economic level". Which is a reoccurring problem in England.

They weren't as vicious as Ramsay, to be honest, but they still reduced a big fat tough rugby player of a baker to tears and a skinny wimpy one with a lisp to potential suicide. Any money he's parked up in a lay-by with a hose attached to his exhaust as I type this.

So I said to Mrs Renny, “Why is everything so fucking competitive these days? Why does every show have to have people being humiliated and thrown out and passed over and told they are no good?” And she said, "It's the way of the world. And could you stop saying Fuck every time you disapprove of something".

She said they do up houses and throw people out, they have singing shows and humiliate people, they have cook offs and bake offs and dance offs. And always people are being torn down and their aspirations and will to live shredded before their very eyes.

And it was then that I got my brilliant idea. “Stay with me here”, I said to Mrs R., "Why is that they dissect the cookery and renovation and dancing and singing worlds and leave the one  where there are really bloody awful, dreadful people, totally alone?"

She said, "You can't have a shag off on TV." "No" I said, "A Parliamentary Showdown! Master Pollie!" I mean, we could have the everyday National problems like the pollies have and then they would be judged on their actions and responses. And even past lives so we get a bit of real dirt in the mix.

"Can you imagine", I said thumping the kitchen table in creative resonance, "how quickly we could have disposed of KRudd and Gillard under this system. Can you imagine the roasting we could have given Peter bloody Slipper and his ilk?" In fact, I think Ramsay would be good! Because he could annihilate them at the end. "Slipper you grovelling little twisted turd, you excuse for a man, you man shagger, you evil misogynistic little creep, get out of my kitchen!  Er, MY PARLIAMENT!" Bloody brilliant!

Bronny needs to be in there too. Her put downs would be legendary given a bit of heady licence. Then we watch them take the long walk while the crowd jeers. Magnificent!

We could get that sheila from 'The Weakest Link’ to compere it. She's a nasty bitch when pushed. Actually Bronny might be better. And when that bloody Sarah Hanson-Young or Penny Wrong put their heads up, it could be open slather.

We'll pack the Public Gallery with a mad mob of disgruntled Australians, and let's face it, we have never had more of those than we have now. This is a winner if ever I saw one! They'd be dragging Lake Burley Griffen every week for these useless excuses for politicians WE HAVE TODAY.

Shorten would be toast. We'd do him slowly. And the good ones would win and go forward. And we'd end up with a decent, good, clever government and there would be not one thing that Labor or their Union buddies could do about it.

This returns Question Time TO the people. With just the right amount of bloody lust and carnage.