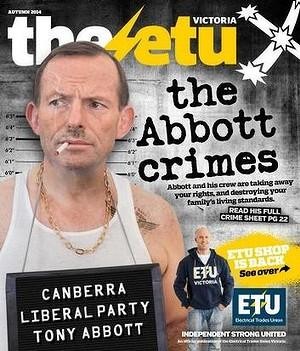 You have to hand it to the Electrical Trades Union. A once fairly quiet union, when compared with the real rabble rousers like the CFMEU and the former BLF, they have recently become more vocal, more vituperative and more stridently unhinged in their claims and demands.

But their latest members’ magazine takes the cake. Abbott is no longer the mild mannered bumbling fool the ETU believes all Liberal politicians to be – he is in fact Adolf Hitler – circa 1933.

They have gone ballistic on Wikipedia research this month with their latest rag which features Tony on the front page, fag in mouth, with a German Swastika on his chest (it has subsequently been masked with a notice).

On the back page, his counterpart Adolf himself takes up the full area with quotes from some dubious mutterings of Hitler's in 1933: "We must close union offices, confiscate their money and put their leaders in prison. We must reduce workers’ salaries and take away their right to strike"- it screams.

Our zesty rag “journo” has gone further. He has discovered that Eric Abetz's family came from Germany in 1961 and they have devoted a full page to their scoop under the banner, “ KNOW YOUR ENEMY!”

Not only is Eric Abetz the employment minister but also the grand nephew of one Otto Abetz who served time for war crimes! The bastard! I knew that there was something about Abetz apart from being the most boring politician in the land. Fancy that! A great nephew to a murderer! Plus, it goes on… a Christian!

And not just any Christian but a member of the Christian Reform Church! A cult they venture.

So Tony is a Nazi and Abetz as close to a war criminal as you could find. That's what the ETU reckons. Take a look if you don't believe me. Sadly, there are enough impressionable electricians and electrical trades workers who will swallow this tripe. That's why they do it.

But I reckon if you dug deep enough, you'd find a few rats in the closets of many union bosses as well. Of course, being reasonable, you would not highlight the sins of their forebears. It would be reprehensible to do so. You can't help your relatives. You are not responsible for their crimes.

Poor little Eric was not even born at that point. To compare Tony Abbott to Adolf Hitler and attribute 81 year old Hitler quotes contextually to Tony is plain stupid. But to suggest by association that Abetz is a Jew hater and a murderer and YOUR ENEMY because his Great Uncle was a Nazi is reprehensible.

I suggest the ETU gets someone called a journalist to write for their Union Magazine.

It might make it more balanced and objective… and something called, er, honest.