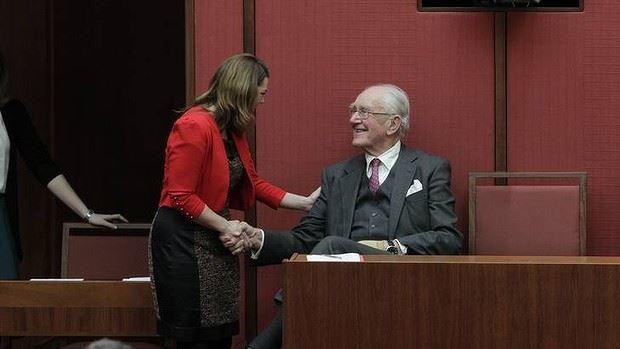 I don't know about you but I am getting heartily sick of old PMs jibing away from the sidelines. Not content with writing volume five of their memoirs or living off their ill-gotten gains, they feel it is their God given right to maintain a running commentary from the bleachers.

Old Labor blokes are the worst and current history proves this with the sarcasm of Whitlam who has slowly declined into old age and now rarely offers a whimper and of course Hawke and Keating who have an opinion on everything using their own tenures as perpetual benchmarks.

This was painfully obvious in a recent interview when Keating sat imperiously in his office doing a documentary for the ABC in which he was surrounded by his clippings and articles quoting chapter and verse every word he had ever said. The point of which is lost on me.

Help get us out of the shit-fight we now find ourselves in Paul at the hands of your contemporaries! Your old diatribes and speeches are long forgotten.

But my own diatribe today does not concern one of these crusty old socialist buggers who are shoring up their posterity after the fact, but Malcolm bloody Fraser. Or Malcolm “Where's me trousers” Fraser if you prefer.

Malcolm is clearly losing his reason to be. I mean, say what you like about Whitlam (and I do) but he at least has the integrity to remain staunchly Labor and will do so until they insert him in the ground.

Malcolm on the other hand doesn't know what he is anymore. He campaigned with Hanson-Young which had most Liberals shaking their heads in disbelief and now he is very touchy feely with Fairfax who published this latest concept and it seems to be courting his madness.

Both fairly traitorous acts for an ex-Liberal PM. Or maybe he has just gone nuts. Which I would not discount at this stage of the game.

On the same day we are celebrating and remembering the sacrifices of our war heroes and dead, Fraser decides it is the perfect day to give us his wisdom on the bigger picture by saying Australia should cut military ties with the United States.

Good one Malcolm you insensitive and deluded old fool.

I get mightily pissed off when people start hanging stuff on the Yanks because Australians certainly weren't doing that when Malcolm Fraser was a privileged little schoolboy at institutions like Glamorgan and Melbourne Grammar while the rest of the country was sending its young men and women to battlefields all over the world. Many of whom died before they had even tasted life.

There was one battle in particular when Australia was in real trouble and at a very high risk of being unable to repel an invasion attempt from the Japanese.

That was the Battle of the Coral Sea.

We didn't have the resources to fight this by ourselves, most of our troops were in Europe or other parts of Asia when this nasty little pickle was rearing its ugly head and the good old Yanks came to our rescue in a heartbeat. With men and planes and ships.

And when it was over, 543 of them had died defending our country and freedom itself.

And Fraser feels we can now forget that by thumbing our noses at America.

Some idiot in New Zealand did the same thing a few years ago and you can bet your bottom dollar that if the shit did hit the fan again, they would be the first people they'd call.

Having America as one of our most important allies today is still the best back-up or threat-prevention that you could wish for in this war ravaged world of ours. In fact I'd take the Yanks over the Poms any day given what they did to us in WW1.

I have had heated arguments with Labor voters on this, one of whom said our friendship with the United States was deplorable given their invasion of Iraq and Afghanistan. So I said, "Well would you feel the same if Muslim terrorists had destroyed Australia
Square and the MLC Centre in Sydney and put a plane into Parliament House in Canberra killing 2977 Australians?"

You guessed it, they'd “conduct discussions to see how we could assimilate”. I said,"You can't assimilate with terrorists!" You Fuckwits!

And now Fraser embarrasses us internationally with this inane thought bubble. For Pete's sakes Malcolm, retire, keep fishing, whatever, but keep your strange ideas to yourself. Because in the context of Anzac Day they are as offensive as they are ridiculous.

If a blazing war does ever erupt again in our part of the globe Malcolm, we will want the Yanks on our side again. They have the machines and men to make our adversaries think again… unless you want to get your old Western District pitchfork out of the barn and leave the Melbourne Club early for the fray.

Better still Malcolm, do what your old adversary Gough did and simply check into a twilight home. “It's Time", Malcolm! (And if I listen carefully I reckon I can hear Tammy applauding such a move in the background.)