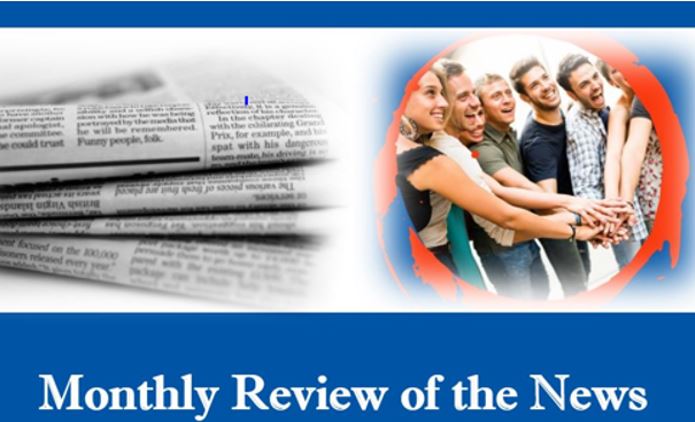 This month has seen most extraordinary social and political changes.

Australia has finally ordered nuclear-powered submarines and terminated the French diesel- deal. With the threat of Chinese aggression becoming more likely, at last the defence department is replacing ‘diversity, equality and quotas’ with submarines, artillery, and action-ready personnel.

The world witnessed the Afghanistan-failure at the hands of the mentally deficient President in the White House. The removal of US troops was also a removal of 20 years of freedom for Afghani women and girls, and a return to Islamic extremism and barbarianism. Did Americans really vote for such a dangerously incompetent head of state? Perhaps it is time to voice what many already know; the US election WAS stolen!

Recent scenes from Melbourne of CFMEU members storming their union headquarters after being sold out by their leader, the scene of an old woman knocked to the ground and pepper- sprayed in the face by police at a Freedom Day rally, and thousands of public servants soon to lose their jobs, because of their medical choices….is a sign that not all is well in the Land Down Under!

Our PM who promised us that ‘vaccines will NOT be mandatory – that is not how we do things in Australia; is now supporting and encouraging quite the opposite! ‘Mandatory vaccination via proxy’ thru businesses and support for vaccine passports are a contradiction of his earlier statements and an anathema to Liberal Party values of; smaller government, support for business, freedom of speech, medical choice and freedom of religion, secure borders, and the rule of law…. but here we are today witnessing a very different scenario!

The virus that has resulted in a worldwide tsunami of lock-downs, economic destruction and governmental over-reach has been exposed as a planned pandemic! Yes…. It IS a scam of criminal proportions according to a growing number of lawyers, economists, scientists, and medical experts. For a virus that is similar to a bad flu it has resulted in what many experts believe is the most blatant of human rights abuses since the end of WWII hostilities.

This is a serious claim and one that may take years to prove!

THE FAILURE OF RENEWABLE ENERGY IN EUROPE

PALMERS LAWSUIT AGAINST THE WA GOVT. WILL HAVE A FORMIDABLE IMPACT

WHEN THE RIGHT TO HOLD A JOB BECOMES A ‘BENEFIT’

A legal challenge to mandatory COVID-19 vaccine requirements for some NSW workers has been launched in the state’s highest court, as virus infections continue to climb.

“It is our view that vaccine compulsion strips citizens of their basic human rights, including their right to work, their right to bodily integrity and their right to informed consent to medical treatment without coercion.”

Since mid-July 2020, the Corona Committee lead by German lawyer Dr Reiner Fullmeich, has heard experts and witnesses on a wide range of issues concerning the virus, crisis management and consequences. In particular, the collateral damage of the lockdown – little evaluated to date – has been examined in greater detail.

The sessions are led by lawyers experienced in litigation.

A comprehensive final report with transcribed passages from the meetings and evidence is in progress.  All individuals involved are committed to the principles of scientific evidence and are willing to engage in factual discussion on the various topics without personal, scientific, or economic conflicts of interest.

So far their investigations have expsosed  a planned pandemic – years in the making, with evidence of 73 patents filed on the SARS Cov-2 virus ( it is neither new nor novel as claimed) and economic, social and medical ‘interference’ on a global scale

Even those already vaccinated with AstraZeneca and Pfizer should be aware that the emergence of new virus variants has hindered efforts to prevent the spread of COVID-19 from vaccines and rendering current vaccines less effective.

Furthermore, SARS-CoV-2 is likely to become endemic with the emergence of vaccine-resistant variants, reinforcing the urgent need to develop effective and safe antiviral therapeutic treatment agents.

Currently only two COVID-19 treatment-drugs are approved by the TGA in Australia;  Remdesivir and Sotrovimab.

The WHO and other medical experts, however, advise against Remdesivir, because of ineffectiveness and side effects, but the TGA has not changed its approval.

Sotrovimab is a novel monoclonal antibody treatment with 79% efficacy in preventing hospitalisation and death in covid infected patients.

As with every medical procedure….with risk must come choice!

Recent anti-lockdown demonstrations in Melbourne have been met with an array of colourful accusations from authority figures in the state of Victoria, including labels such as “anti-vaxxers,” “conspiracy theorists,” “far-right extremists,” and “man-baby Nazis.

The fallout we see today, is that individuals who advocate for ideas outside of prevailing narratives—including around vaccine mandates or lockdowns—are considered ‘abnorma’ or are characterised as having serious personality or mental issues.

Without realising it, we have allowed the Authoritarian Personality to become the guiding light of Western institutions.

NO HEALTHCARE FOR THE UNVACCINATED SAYS DAN!

Apparently, politicians like their newfound dictatorial powers to act as slave masters… and one in Australia has decided that non-vaccinated people (the ones who can see for themselves that the vaccine is deadly and ineffective) will not be able to buy and sell, or receive healthcare.

Freedom as defined by access to medical treatment, the ability to work, shopping, attending events and engagement in the economy writ large, will not be permitted for any non-vaccinated citizen.

Anyone who is not vaccinated will remain in locked-down isolation as enforced by the state.

Will we see a mass exodus of Victorians to other states…or nations?

In the request, the duo accused members of the UK government and its advisors of being complicit in crimes against humanity, genocide, and breaches of the Nuremberg Code in the name of Coronavirus Disease 2019 (COVID-19) vaccines.

Mayne and McCallum were joined by lawyers from Slovakia, the Czech Republic, and France to file a joint claim, asking the ICC for a moratorium on “the entire COVID-19 vaccine program” in all four nations, as well as ending the testing of asymptomatic people.

Another interesting development to watch!

The 6 keys to success provide the key areas of focus to support existing digital platforms, and to enhance governance, processes, and capabilities in order to maintain and sustain a growing portfolio of digital platforms.

Australians have become conditioned to higher levels of surveillance throughout the ‘pandemic’; QR codes, credit cards, online shopping, planned vax-Pasports, and their Medicare records linked to a new ‘Digital Wallet’ announced by the PM.

We suspect there is MUCH MORE planned for this new digital space! ALL your personal information (incl. banking) will be accessible by government across multiple platforms.

Is this the beginning of a hyper-surveilled and controlled state?

The TGA has also issued ‘provisional determination’ approval for 3 other treatment drugs; Mulnupiravir, Redanvimab and Ronapreve.

It appears to be effective in treating many strains of the coronavirus infection.

Roche’s drug Ronapreve is licensed for ’emergency use’ to treat or prevent acute COVID infection in 20 countries including the US, Japan and India. Administered by injection or infusion, the report says “this therapy is likely to be most beneficial for those with compromised immune systems and those with immunodeficiency disorders.”.

Links are available to all 3 however we supply only one.

COVID DEATHS AND DEATHS FROM OTHER CAUSES

World Life Expectancy provides an excellent simulation of historical averages of deaths around the world.  It also demonstrates the number of deaths from COVID, before and after vaccine rollouts against historic averages of death from other causes.

The website is interactive – you can choose any nation.

To 26/9/21 the major cause of death in Australia based on historic averages was:

The Australian government’s response to the SARS Cov-2 virus appears to be totally disproportionate to the risk of dying from COVID ( compared to other diseases). COVID  still remains the lowest cause of all deaths in Australia!

The statistics also demonstrate the effectives of vaccines, in highly vaccinated nations such as Israel and the UK.  Interesting to note that COVID deaths increased exponentially AFTER mass- vaccination commenced in early 2021 in both nations.

3: Is natural immunity (in recovered COVID patients) better than injected immunity from vaccination?

These figures would suggest so!

We have watched in dismay escalating police violence against unarmed civilians in Victoria. The world is watching in shock! This is evidence of a collective failure by the states and federal government, and the Prime Minister in particular. Such brutality cannot be justified under ANY emergency powers, let alone state Public Health Orders. The PM has been missing in action; he has refused to stand up for the values of the Liberal Party and appears to support the destruction of our democracy.

The PM has lost control of the nation. He is seen as duplicitous and weak.

The National Cabinet has given state and territory premiers extraordinary and unconstitutional powers. The Prime Minister has failed to lead the cabinet.

This government CANNOT BE SUPPORTED unless there is a distinct change in direction, an acknowledgement of human rights abuses, and a return to the rule of law.

Watch this haunting video of the ‘new’ Australia

We refer to a report from Lieutenant Colonel Theresa Long, MD, MPH, FS, a Department Of Defence Military doctor in the US who details vaccine damages in her patients (Airforce pilots), assesses the high risk of vaccinated military pilots on active duty, and who calls for an injunction on the vaccine rollout.

However, despite mounting evidence of vaccine harm and warnings from medical experts around the world – our governments push these experimental vaccines with evidential adverse impacts!  At the same time,  the TGA places a ban on Ivermectin – a safe and effective, alternative treatment for COVID-19.

Mandating vaccination breaches the Bio Security Act 2015, the Australian Constitution and several international treaties. ALL medical procedures are VOLUNTARY under the law.

The government CANNOT BE SUPPORTED unless there is a distinct change in direction, an acknowledgement of human rights abuses (thru supporting vaccine mandates) and a return to the rule of law.

NB: Since creating this post, the full report has been removed from the internet!

Once again this month we attempt to bring you an overview of the big news items and present alternate information on controversial topics. We leave YOU to draw your own conclusions armed with knowledge from different respectives. In an age of censorship, media misinformation and government overreach, it is important to keep an open mind, and STOP believeing everything the MSM or the government tells you.

Please share our information with your friends and associates.

If they wish to receive our monthly ‘review of the news’they can join us by clicking the link below:

This fantastic newsletter was compiled by the good folk at Rite-ON! Pty Ltd

GO DIRECTLY TO JAIL – DO NOT PASCOE