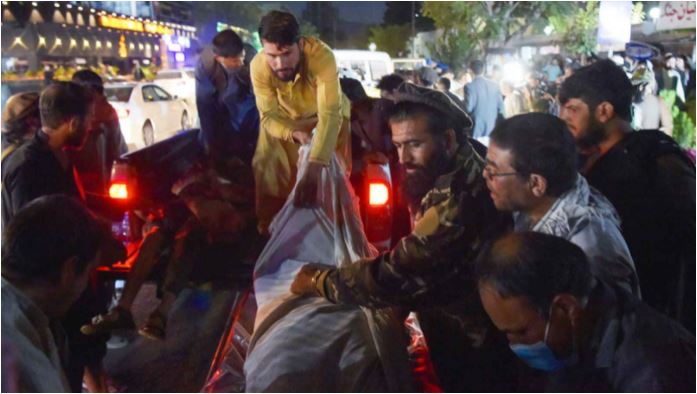 The nominal president of the United States looked even more tired and defeated than usual in his remarks about the jihad-martyrdom suicide bombings in which thirteen Americans were killed at what is still called Hamid Karzai International Airport, but which the Taliban should soon rename the Joe Biden International Airport, in honor of the man who has done so very much for their cause.

The jihad massacre came as Politico revealed that “U.S. officials in Kabul gave the Taliban a list of names of American citizens, green card holders and Afghan allies to grant entry into the militant-controlled outer perimeter of the city’s airport, a choice that’s prompted outrage behind the scenes from lawmakers and military officials.

The move, detailed to POLITICO by three U.S. and congressional officials, was designed to expedite the evacuation of tens of thousands of people from Afghanistan as chaos erupted in Afghanistan’s capital city last week after the Taliban seized control of the country.

It also came as the Biden administration has been relying on the Taliban for security outside the airport.”

Yes, you read that right: “the Biden administration has been relying on the Taliban for security.”

If anything is emblematic of the wrongheadedness and impotence of the regime in Washington, and its utter indifference to the well-being of the American people, both those that are stuck in Kabul and those that are stuck stateside, it’s that phrase: “the Biden administration has been relying on the Taliban for security.”

Now, the American government many years ago decided that Islam had nothing whatsoever to do with terrorism, and that studying Islamic doctrine in order to understand the behavior, motives, and goals of jihad terrorists was not only a worthless endeavor, but one that was undertaken only by “Islamophobes” who were more of a threat to the United States than the jihadis they were studying in order to defeat.

And so that cow left that particular barn a very, very long time ago, and there is consequently no reason to think that anyone in Biden’s handlers’ State or Defense Departments have the first foggiest idea of the fact that making agreements with jihad terrorists is useless, because they will not honor agreements made with infidels for any longer than they need those agreements.

Islamic law holds up the Treaty of Hudaybiyya as the model for all agreements with infidels.

This was, according to Islamic tradition, an agreement Muhammad entered into with the pagan Quraysh who controlled Mecca at that time. Islamic tradition also records that when Muhammad no longer needed the treaty, he broke it.

That, as far as the Taliban are concerned, since they scrupulously follow Islamic law, is how one makes deals with infidels. And so when they told Biden’s handlers that they would provide security outside the airport, Biden’s handlers should have known that this agreement would last only as long as the Taliban believed they needed it, and not one second longer.

Also in play may have been a memorable aphorism attributed to Muhammad: “War is deceit.” Might the Taliban have fooled Biden’s handlers into thinking they would be good for security, all the while luring the Americans into a trap in order tomaximize American deaths?

Biden’s savvy, “America is back” team of foreign policy experts should have seen all this coming, and never gotten into this situation in the first place. But they didn’t, because they know it’s a religion of peace, and that you’re a vicious “Islamophobe” for thinking otherwise.

Yes, Leftists will pipe up at this point, Trump concluded a deal with the Taliban, too. Yes, he did. And no, he shouldn’t have done so, either.

But Trump did not entrust the security of Americans to the Taliban, or leave Americans unprotected in a catastrophic withdrawal that seems designed, if it has any design at all, only to maximize the number of Americans left behind.

After all, the administration was much more concerned with bringing Afghans to the United States than rescuing Americans in Kabul.

Pentagon spokesman John Kirby said on August 15: “Once we get more airlift out of Kabul, we’re going to put as many people on those planes as we can. There will be a mix…not just American citizens, but perhaps some Afghan SIV [Special Immigrant Visa] applicants as well.

We’re going to focus on getting people out of the country, then sorting it out at the next stop. It’s not going to be just Americans first, then SIV applicants.”

“In the past 24 hours, uh, five flights landed at Dulles International Airport, with approximately 1,300 passengers. At this time, four military installations, as well as Dulles International, are receiving Afghans as they, uh, come into the United States. These installations include Fort McCoy, Wisconsin; Fort Lee, Virginia; Joint Base McGuire-Dix-Lakehurst, New Jersey; and Fort Bliss, Texas.

The total number currently at these installations is approximately 1,200, and NORTHCOM continues to build out capacity, uh, to ensure they are prepared to receive more flights that will come in the next few days.”

Those 2,500 Afghans were just a small percentage of Biden’s handlers’ plans to bring 30,000 Afghans to the United States. It’s unclear exactly how many have already arrived. But they will likely become reliable Democratic party voters, and that’s all that matters.

As Kamala Harris said, “We did it, Joe!” 13 American service members killed in Kabul? Well, a lot of them probably voted for Trump, anyway.

The Afghan new arrivals won’t make that mistake. And so all will be well. But watch for the next jihad massacre, and for Old Joe to look even worse during his recitation of his scripted remarks that time. It’s all right. He doesn’t write any mean tweets! 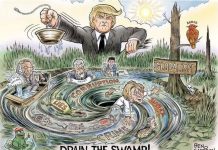