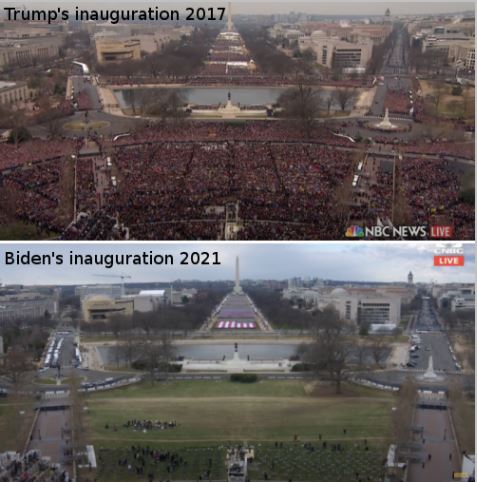 For those who still think Joe Biden won his election legitimately and with popular support, you need only look at the two screen captures to the right, comparing the crowds at the previous presidential inauguration (at the top) and the crowd today at Biden’s inauguration.

It is also important to note that the Trump crowd in 2017 was totally normal, comparable to every past public inauguration since such events became occasions of grand splendor.

For Democrat Joe Biden, however, the lack of a crowd is essentially unprecedented. While past inaugurations were greeted with large enthusiastic crowds of citizens coming to celebrate the democratic and peaceful transition of power, today’s event was heralded by wartime security, barbed wire fences, military checkpoints, and a military police guard of 25,000 troops. Biden officials claimed this tight security was necessary because of the threat of violence.

I ask however: If 80 million voters swarmed the polls on November 3rd to elect Joe Biden, why does his new administration feel so afraid of the American people? No president in the past was this terrified of taking his oath of office in front of a gigantic crowd. Even Abraham Lincoln did so before a huge crowd in 1865, even as the Civil War still raged, as the photo below shows most emphatically.

No, the inauguration of Joe Biden is something quite different than any past American transition of power. It comes surrounded by numerous allegations of election tampering and vote count fraud. A vast part of the population — quite likely the majority of the country — strongly believes the election was stolen, a belief that has been reinforced by the aggressive resistance of election boards and Democrats to investigate those allegations. That resistance has been so strong that the Democrats and their supporters have even made it their goal to blacklist and destroy anyone who even dares raise the question.

The rest of this article can be read at behindtheblack.com