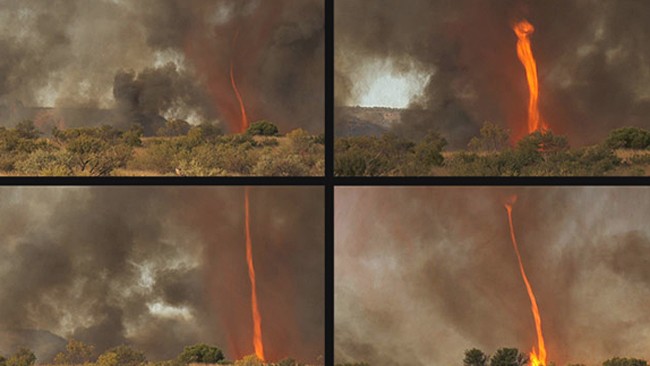 AN Australian filmmaker refused to sell footage of a firestorm to former US vice-president Al Gore – to use in Mr Gore's climate presentations – because the event was unrelated to climate change.

Chris Tangey from Alice Springs Film and Television recorded the phenomenon on Curtin Springs Station, 360km south-west of Alice Springs, while scouting locations for a film.

The footage has been an international sensation reported widely in global media.

In an email exchange with Mr Gore's office, Mr Tangey said using the footage in a climate-change framework would be "deliberately deceptive", the Northern Territory News reports.

"I am aware that you may have missed the reporting on the very localised nature of this firestorm," Mr Tangey wrote.

"However, in any case, I am confused as to why you would offer to buy a licence to use it at all unless you had conducted even elementary research which might indicate that this Mt Conner event had direct linkage to global warming/climate change."

Joel Lisonbee, manager of the NT Climate Services Centre, agreed and said he would not link such an event to global warming.

"This event was better described as a dust devil within a fire. Most of us have seen dust devils and know they are not uncommon," Mr Lisonbee said.

"You need hot, dry conditions but you get those in desert-like conditions everywhere, regardless of global warming."

Jill Martin, from Mr Gore's office, said the famed American climate change advocate wanted to use the footage for up to five years in his PowerPoint presentations to live audiences worldwide.

"Mr Gore recently saw the amazing footage of the fire tornado taken on September 11, and is interested in showing it during some of the presentations he gives on environmental topics," she wrote.

But Mr Tangey said it was "difficult for me to imagine a fire event less relevant".