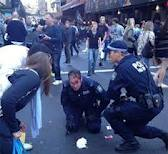 Leaders of Islamic communities in Sydney and Melbourne this morning called for restraint. “A tiny excitable element within our movement has acted without our authority and it is unacceptable. Both sides including the Police should show restraint. We will instruct that no further demonstrations be carried out in the near future.”

Muslim community leaders have expressed dismay and have made concerted efforts to limit further damage to the public perception of Islam by distancing themselves from these "excited elements".

Their resolve appears to be in contrast to an 8 year old girl, Ruqaya, who addressed a 600 strong conference of the radical Hizb ut-Tahrir in Bankstown on Sunday. (There were claims the attendance was over 1,000.) In reading from a prepared statement she espoused all Islamic children’s love of Jihad and her wish to live under an Islamic State.

UK leader of Hizb ut-Tahrir (HUT), the Islamic extremist Taji Mustafa, will address the conference. Julia Gillard has approved of his visa saying, “I will not deny him a visa on Tony Abbott’s say so”.

The 600 or so attending the conference in Bankstown seem at odds with claims the extremist element is, “just a tiny minority”.

“We will.continue the fight as our beloved prophet has said we must”, said one conference attendee. The meeting was orderly.

Islamic community leaders have asked that Mullahs address the problem of violence at Friday prayers.