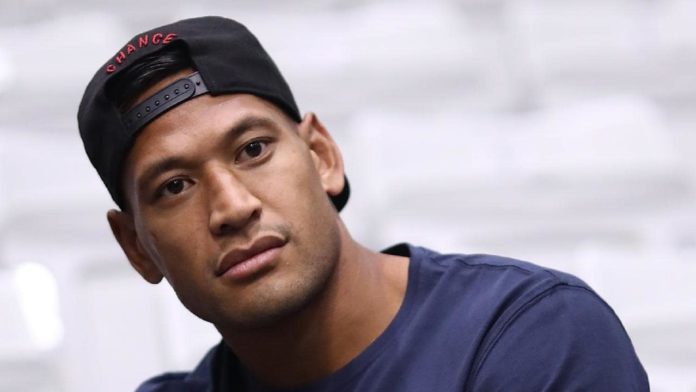 It was always going to happen. Australians have for years and years been pushed and pushed. Told what to think and what not to think.

Thought control, brilliantly prophesied many years ago by George Orwell, has been slowly invading and taking root in the very fabric of Australian culture. Insidiously, powerfully and threateningly it has been sliding like a serpent in the grass past our ankles, often unnoticed.

This has been an invasion of a new order, not a physical invasion but a mental one. Australians are famous for their fighting spirit in the physical theatre of war, their bonds of mateship running deep, but mental war?

In mental war we are newcomers.

On an instinctive deeper level, there has been a deepening sense of violation.

It is fitting that a footballer is at the epicentre of the pushback, for football is central to Aussie culture. It is the fireside where Aussies warm their hearts, share and enjoy a sense of community. It needed to be a footballer and Israel Folau, by all accounts a very likable, decent, earnest, sincere man, was the one destiny chose. He now is the torchbearer for all who wish to push back Communistic invasion into our land .. the mental invasion that has been so little understood but deeply felt by all.

A QANTAS CEO, Communist-infected, attempted to punish Israel for having his own thoughts. Yes, there is always an excuse, but the deeper reality is Israel felt a heavy boot on his throat when living his life as we all do. If he breached any contract then that contract should never have existed. A homosexual, in defence of his own sexual practice, has no right on any level to big brother a man he has never met who is living his life in a totally normal way. Israel happens to be religious, were he not, the same applies.

What we are witnessing is a massive rejection of thought control, more deeply of Communism. Money is pouring in. More and more people are getting on board. Australian Rugby risks bankrupcy. Many media personalities who thought they ruled, had the upper hand, are feeling their real or imagined grip on Australia loosening. Australia is finding her very spirit. She is finally, in a half conscious state, throwing off Political Correctness, more deeply Communism. Many don’t fully understand what they are doing, it is more an instinctive act they feel they must carry out. A full, more lucid comprehension of what this is really all about will hopefully come later, but a great surge of anti-Communistic defiance is now well under way.

This is deeply needed for our country and could well inspire and give heart to other countries around the world currently riddled with Communistic invasion.