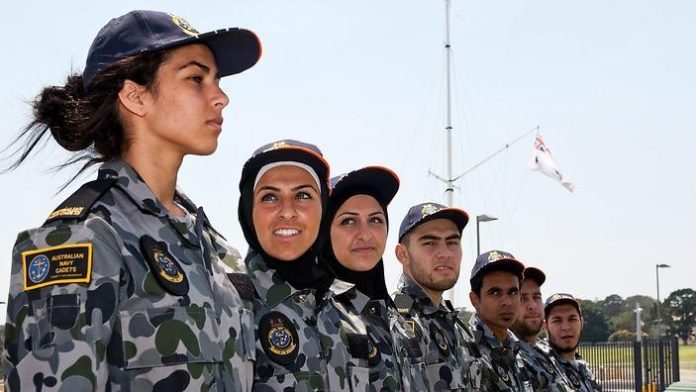 First there were the rumours.

Soldiers based at Puckapunyal were told that halal ration packs were on the way. That was about a year ago.

Then came the facts.

Documents obtained via FOI reveal that on 23 September, 2015, a minute was sent to the Deputy Chief of Army. It requested his endorsement of ‘R222018658 ADF Combat Ration Pack User Requirement’.

The request sat on Major General Rick Burr’s desk for a week.

With a stroke, the Army was now ordering halal combat ration packs.

And not just a few.

Although there are less than 100 Muslims in the 28,000 strong Australian Army, one third of all combat ration pack configurations must now be halal. That is, the meat in these ration packs must be sacrificed to Allah, who just happens to be the spiritual inspiration of our battlefield enemies.

The rationale behind this decision is detailed below:

“CRP [combat ration packs] should be designed to take account of the broad religious, ethnic, and cultural diversity of the ADF and alliance partners in aspects of food choices and their preparation and consumption.”

Captain Mona Shindy (of @navyislamic Twitter fame), the Chief of Navy (of fasting in solidarity with the Islamic community fame), the ADF’s new imam (of pro-Sharia law fame) and about 100 Muslims across the entire military have been ‘broadly’ interpreted to mean that there is a requirement for one third of all ration packs to be prepared in accordance with Islamic law.

And if they can’t eat them all, then I guess al Qaeda and the Islamic State must have been ‘broadly’ interpreted as ‘alliance partners’. No doubt the enemy will be pleased.

Soldiers, on the other hand, might not be so pleased.

They haven’t been asked at all about whether they want to go to war carrying rations that are specifically prepared to meet the needs of their enemy’s ideological dietary requirements.

This is even though the Defence Force’s equity and diversity policy requires that people be consulted about the decisions that affect them.

At least this policy stipulated in 2013 that such ‘consultations’ occur. Now that the Australian Defence Force is advancing down the diversity path with a pathological zeal, this requirement appears to have been dumped.

I guess this explains why there were seven (out of eight) standard menus containing meat in 2007/08 and now, in 2016, there are only four.

Out of twelve menus.

The other eight menus on table are halal, kosher and vegetarian. This new diversity of menu helps to explain why the Department of Defence recently put its stamp on a document that complained about the high number of Anglo-Australian males serving this nation.

So much for diversity. There’s now a stipulation that soldiers must scoff down Sharia sandwiches.

All of this follows the appointment of an imam to the military who has publicly supported Hizb ut Tahrir and condemned laws that prohibit the advocation of terrorism on the basis that they infringe free speech.

It follows the revelation that the Guide to Religion and Belief in the Australian  Defence Force linked to an Islamic website that admonished Muslims not to join non-Muslim armies unless they could do things of benefit to the Islamic community, like obtain military secrets.

It follows news that more Muslims from Australia have signed up to fight for the Islamic State than the Australian Defence Force. Actually, to be fair, one of the first jihadis signed up for both.

And all of it has been an embarrassment for the Australian Defence Force.

So one does not need to be Einstein to work out where this is going, particularly as news reports of ‘halal’ ‘certification’ ‘charities’ coming under scrutiny for financial mismanagement are becoming all too frequent.

This will become another embarrassment for the Australian Defence Force. An embarrassment on top of the fact that it has buckled already and required one third of its ration packs to be halal.

An Islamic certifier has called for Sharia precincts on the Gold Coast and takes great delight in calling Australians who do not want to consume halal food, ‘bigots’.

One organisation has deliberately concealed funds it sent overseas and demanded that organisations provide Islamic prayer rooms in all premises to obtain certification. Another has also admitted to sending funds overseas.

Others have admitted to funding programs that promote Islam in Australia with funds raised from ordinary Australians.

One has lost its status as a charity for operating on a ‘for profit’ basis.

Another is currently entangled in embarrassing scandals as a result of the mismanagement of millions of taxpayer dollars. It may soon lose its charity status too. Its leaders have condemned the jail terms handed down to convicted terrorists.

Some Islamic charities have even been implicated in the funding of terrorism.

None of this even delves into whether these organisations support groups like Hizb ut Tahrir. Or worse. And some of them (or their bosses) are on the public record as defending an organisation that has called for an army to impose Sharia law in Australia.

At some point, this debacle is going to come back to bite the Australian Army.

But that’s the risk you take when you have a military more focused on force feeding Sharia law food to Aussie Diggers in order to tick a diversity box, than understanding the Sharia law basis of Islamic aggression against our nation.

If the Australian Defence Force is going to go to such extreme lengths to demonstrate ‘diversity’, it should not be surprised that it eventually alienates everybody.

(Bernard Gaynor has a background in military intelligence, Arabic language and culture and has returned from three Iraq deployments. He is an ALA Senate candidate for Queensland. He blogs at bernardgaynor.com.au)

IT WAS NO PICNIC BACK THEN, EITHER