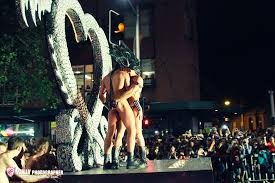 Bernard Gaynor has rejected claims from gay activist, Gary Burns, that he is inciting hatred and serious contempt of the homosexual community by highlighting the exposure of children to sexually-explicit activity at the Sydney Mardi Gras and for pointing out that a homosexual publication has the same title that a Royal Commission found was used also by a group seeking to legalise paedophilia between adult males and young boys.

Mr Burns issued a statement on Sunday, 20 October, 2013 that he was going to sue Mr Gaynor for highlighting these facts.

While Mr Gaynor is more than willing to defend his position in the courts, he has instead appealed to Mr Burns to work with him in good faith to protect children from sexually-explicit activity.

“I am asking Mr Burns to work with me in good faith to prevent children from being exposed to sexually-explicit behaviour at the Mardi Gras,” Mr Gaynor said.

“Earlier this year children watched as almost entirely naked men engaged in sexual embraces and adults who described themselves as sexual ‘perverts’ marched past them in leather g-strings.

“I hope that Mr Burns is as unhappy as I am that this occurred.

“Despite our differences regarding the morality of homosexuality, there is an opportunity to work together to protect children. It would be disappointing if Mr Burns did not accept my offer.

“Regardless of whether Mr Burns is willing to work with me to prevent children from being exposed to sexually-explicit activity at the Mardi Gras, I will continue to highlight these concerns.”

“It would be most concerning if the Mardi Gras organisers felt that it was acceptable next year to expose children to sexually-explicit activity again”, Mr Gaynor said.