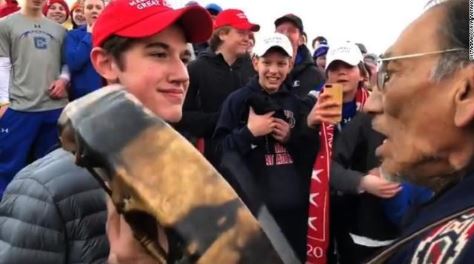 The Washington Post has settled a $250 million defamation lawsuit filed by Covington Catholic High School student Nick Sandmann for an undisclosed amount, after the teen claimed the left-leaning news outlet ‘led the hate campaign’ against him following a racially charged January, 2019 incident at the March for Life Rally at the Lincoln Memorial.

Sandmann was viciously attacked by left-leaning news outlets over a deceptively edited video clip from the incident, in which the teenager, seen wearing a MAGA hat, appeared to be mocking a Native American man beating a drum (a known political grifter who lied about the incident, and stole valor).

The following day, a longer version of the video revealed that Sandmann did absolutely nothing wrong – as the Native American, Nathan Phillips, aggressively approached Sandmann and beat a drum in his face.

Sandmann – who settled a $275 million lawsuit with CNN over their coverage of the incident, also tweeted “The fight isn’t over. 2 down. 6 to go.”

Sandmann is also suing ABC, CBS, The Guardian, The Hill and NBC Universal.