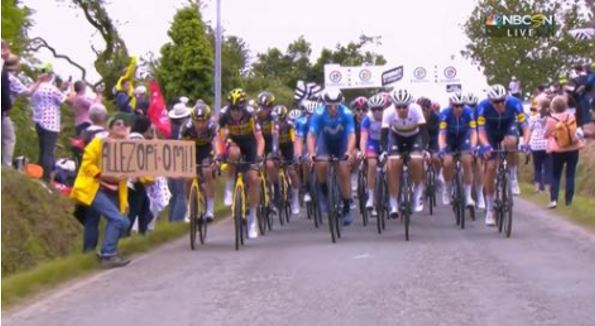 An oblivious and careless fan set off a horrific mass crash just as the famed annual multi-stage Tour de France was getting underway on Saturday.

The fan was seen essentially posing for a selfie – trying to get on TV – in front of the pack of riders as they were coming up fast and tightly grouped.

While holding a handwritten sign that said “Allez Opi+Omi” (a hello message to her Grandpa and Grandma, apparently) the spectator stayed in front of the peloton up to the very moment a rider with no way to avoid the obstruction collided with the person, causing a chain reaction of crashes.

Dozens of riders went down in a pile-up so large it blocked the road for the rest of the pack, which sent at least one athlete to the hospital.

“The crash, one of two on the stage, saw Jasha Sütterlin (DSM) transported to hospital with an injured hand,” Cycling News wrote.

“He was cleared of any fractures. Eight other riders received treatment from the race doctor after the incident with more injured but not officially recorded in the medical bulletin.”

The fan, who appears to be a young woman, is being sought by authorities after she fled the scene and is believed to have flown back to her home country, likely Germany.

According to AFP, Tour de France organizers plan to take legal action against the woman:

The roadside fan who caused a giant crash in the first stage of the 2021 Tour de France on Saturday will be sued by the organizers.

A woman held up a banner while standing on the edge of the road and was looking straight at the television motorbike cameras, with her back turned on the speeding peloton.

“We are suing this woman who behaved so badly,” Tour deputy director Pierre-Yves Thouault was quoted as saying. “We are doing this so that the tiny minority of people who do this don’t spoil the show for everyone,” he added.

A number of cyclists could later be seen completing the stage with bloodied arms and scratched up legs while writhing in pain. Another cyclist reportedly suffered a dislocated shoulder.

The incident unleashed public fury and condemnation, as well as anger among the riders, especially after it was revealed the woman had quickly fled.

Race authorities released a statement later in the day saying “for the Tour to be a success, respect the safety of the riders! Don’t risk everything for a photo or to get on television!”

Recent years have seen more and more mishaps and injuries during the iconic 3-week long race across France given the presence of fans who attempt to get selfies, or who run along the racers – getting too close.