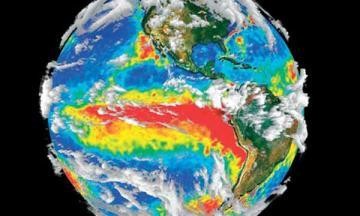 Every time a north wind blows hot air over Adelaide, some Chicken Little cries “Global Warming”. And when an El Nino predictably causes a hot year like 1998 or 2015/16, some sensation-seeking celebrity will trumpet “hottest year eevah”.

They are watching short-term weather ripples and waves and ignoring the underlying climate tide. Daily, monthly and yearly temperature records will always be equalled or broken by extreme weather – that is what weather does.

In the medium term, Earth temperature trends are influenced by variations in solar activities as evidenced by sun-spot cycles. These variations affect solar intensity, cosmic rays, clouds and Earth temperature, causing medium-term climatic events like the Little Ice Age and the Modern Warming. There are persuasive signs that recent solar activity has peaked. So we can expect cooler weather soon.

But to see what the climate is doing we must look long-term and study the glacial cycles. The Milankovitch cycles of Earth in the solar system control these.

Is it warming or cooling now?

There are many signs that Earth’s climate is gradually cooling (as Prof Carter shows in the video above).

For example, snow and ice is accumulating.

In the Antarctic, Mawson’s Hut and the Colbeck Hut are being progressively buried in ice. In Greenland, “The Lost Squadron”, which was forced to land on the Greenland Ice sheet in 1942, was rediscovered 50 years later buried under 268 feet of ice. Many glaciers are just a few thousand years old, and Himalayan glaciers are growing.

To read more about things getting buried in the snow and ice, see Mawson’s Hut:

We live in the Holocene warm interval within the Pleistocene Ice Age – a time of recurring cycles of ice separated by brief warm interludes. Earth’s climate is driven by solar system cycles, and climate changes appear first in the Northern Hemisphere which has more land in the sensitive sub-polar regions. The GRIP ice core from Greenland shows the long-term average temperature there peaked 7,000 years ago and has trended down for at least 3,000 years.

Greenland now cooler than 8000 year ago:

We will still have hot days and heat waves but the climate mid-summer has passed and the temperature tide is going out. Spreading alarm about short-term temperature fluctuations of a fraction of a degree is a distraction.

No warming for 58 years:
http://realclimatescience.com/2016/03/noaa-radiosonde-data-shows-no-warming-for-58-years/

Moreover, promoting damaging energy and land management policies designed to prevent warming just as the next climate winter approaches will be seen by future generations as bizarre.