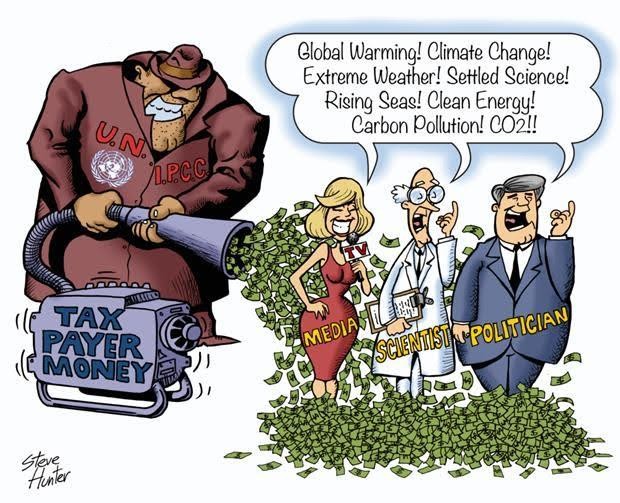 Second, we see lazy, incompetent or biased media failing to mention that drought, floods, fires, storms, hurricanes and melting ice are not unusual and have happened many times in the past; and we endure a climate of suffocating censorship by government-owned media.

The Depths of the Climateers’ Deceptions:
https://quadrant.org.au/opinion/doomed-planet/2015/11/depths-climateers-deception/

Fourth, we have mendicant island states claiming imminent inundation from rising sea levels despite tide gauges and satellites showing that nothing unusual is happening to sea levels.

Finally, we see politicians with hidden agendas exaggerating warming dangers while ignoring warming benefits, pushing propaganda as education, and lying about the “pollution” supposedly caused by the gas-of-life, carbon dioxide.

The climate “industry” produces little that can be sold to willing consumers in an open market. It comprises an overflowing tub of handouts and privileges extracted from taxpayers and pumped out by officials as research grants, travel perks, fat salaries, carbon credits, climate aid, green energy subsidies, tax breaks to energy speculators, price support schemes, protected markets, and punitive taxes and regulations to punish consumers who dare to use hydro-carbon fuels.

In every exchange of goods and services in the real economy, both parties are alert to ensure honest dealing and real value. Of course, waste, cheating and breach of contract does occur, but is not endemic, because it is so much harder with two suspicious auditors present at the close.

The global warming business, however, thrives on bribes funded by other people’s money. The rorted tax payer is never present when deals are done, so glad-handing officials and politicians use the funds to pursue their agendas, and the recipients of climate aid do and say whatever is needed to keep the funds flowing. Neither party cares about getting value for those who pay – taxpayers and energy users.

This climate of corruption is approaching a tipping point – the over-burdened victims are ready to revolt.