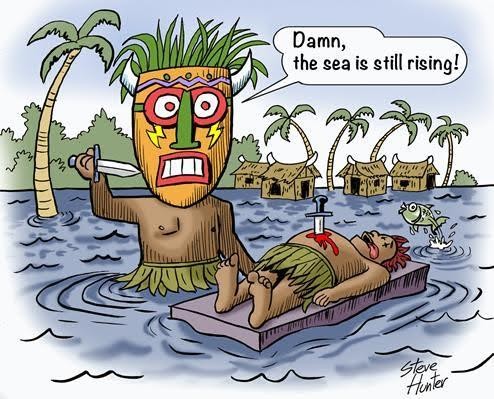 Climate is always changing, but luckily we live in an era with a stable, benign, warm climate and a healthy, abundant bio-sphere.

Alarmists who claim that today’s climate changes are unprecedented have not checked the climate history written in the rocks, the ice cores, the satellite registers and the tide gauges.

Ice core records show that current temperatures and sea levels are not extreme – they are more stable than they were as the last ice age ended just 12,000 years ago. At that time, global temperature increased quickly, the great ice sheets melted, sea levels rose rapidly (130 metres), and the warming seas expelled much of their dissolved carbon dioxide into the atmosphere

As a result of this natural global warming and the additional moisture and carbon dioxide plant food in the atmosphere, plant life recovered and the great forests and grasslands were re-established.

Not one coal-fired power station, diesel truck or feedlot of belching bovines contributed to those massive climate changes; and ancient witch-doctors were unable to prevent flooding of coastal settlements by sacrificing humans to the Climate God. Then, as now, nature controls the climate.

More recent evidence from ice cores, sediment layers and even historical records show that for the last 7,000 years Earth’s climate has been relatively stable. Even more recently, satellite records show that global temperatures have not risen significantly for 18 years.

The tide gauges surrounding the Pacific show that sea levels are barely rising and satellites show that there is little change in the average area of polar ice.

Our climate is NOT changing rapidly, no matter how often alarmists and their media mates repeat this lie.

Today, witch-doctors wearing UN/IPCC head-dress are again demanding that humans sacrifice their industry and jobs on the carbon altar in the hope of changing the climate. This sacrifice will enrich green vested interests but will fail to change the climate.

Alarmists should check the facts. Just one stubborn fact or careful observation will beat 97 pal-reviewed opinions.

Some Fact Checking on Bank of England alarmism:
http://wattsupwiththat.com/2015/10/12/fact-checking-mark-carneys-catastrophic-climate-claims/