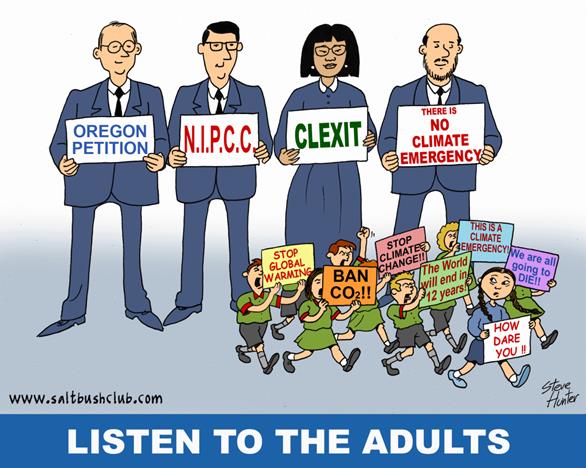 The Silent Majority do the work of the nation. They pay the nation’s bills and taxes and only make their presence felt at election time.

They despise most career politicians but many fear reprisals from Big Government or Big Business should they be seen speaking out.

But when sufficiently aroused they toss out the chicken-littles and turn to leaders like Donald Trump, Jair Bolsonaro and Boris Johnson.

The Red Green-ants are forever nibbling away at the foundations of free societies. They inflame and exploit naïve crusaders like the Noisy Children.

Green-ants hate all individual and property rights that stand in the way of total UN control of western energy, consumers, industry, currency and military.

Angela Merkel and the Green New Deal are prominent examples of this powerful group.

The Noisy Street Children (and too many of their teachers) despise science, engineering, wisdom and experience.

They are being manipulated by handlers with a globalist agenda and amplified by fellow travellers with media megaphones.

They are likely to morph into tomorrow’s version of Hitler’s Brown Shirts and Mao’s Red Guards both of which supported a green agenda.

Neither of these noisy revolutions ended well. Our hope is with the sensible students and teachers who are not clogging the streets and who prefer education to indoctrination.

But not all kids are brainwashed:
https://www.realclearpolitics.com/articles/2019/09/24/socialism_not_climate_change_is_the_real_threat_141323.html

The Wise Elders have formal education and/or life experience, and the freedom to be outspoken. They are despised by the Noisy Children and denigrated or ignored by the government/green media.

In the face of a looming energy crisis the Silent Majority and the Wise Elders are shattering the idea of a climate alarm consensus.

Firstly, 31,487 of them signed the Oregon Petition which said there was no convincing scientific evidence of a climate catastrophe caused by carbon dioxide:
See: http://www.petitionproject.org/

Thirdly, about 200 climate realists from 26 countries put their names to the Clexit (Climate Exit) Campaign urging all nations to exit and defund the UN climate activities:
https://clexit.net/about/
http://clexit.net/wp-content/uploads/2016/07/clexit-members.pdf

Fourthly, about 650 mature adults have put their names to Australia’s Saltbush Club which encourages all nations to EXIT the Paris Climate Agreement.

Some hundreds of others are listed as Silent Saltbush Supporters because they fear reprisals against their career, family or business if their names become public.
https://saltbushclub.com/about/

Finally, even the silent sufferers in the Green EU are revolting, Just last week Europeans initiated and presented a petition to The UN which proclaimed:
“There is no Climate emergency”.

This document has quickly attracted support from 500 mature adults from all over the world, not just Europe. It is still growing.
See: https://www.saltbushclub.com/wp-content/uploads/2019/09/ed-no-climate-emergency.pdf

These lists represent the tip of a huge iceberg of sceptical dissent. Green-red politicians, academia and media have sown the wind – they will reap the whirlwind.

VIRTUAL KISSES NOT RIGHT UNLESS THEY ARE LEFT