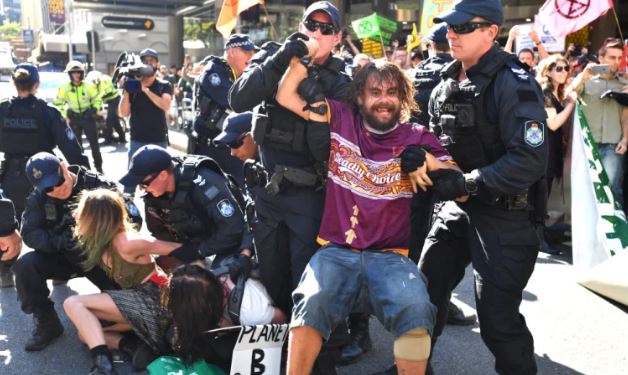 We don’t need rowdy Extinction Hellions on our streets – we need Education on Extinctions in our science academies, classrooms and media.

Extinctions are natural events that close every chapter of Earth’s history – they remove species that can’t cope with competition or change. Better adapted species take their place.

There is NOTHING unusual about current conditions or trends except for today’s huge human population. (Dinosaurs also were very numerous and successful, but only remnants of their line remain today.)

There are at least 17 major extinctions recorded in Earth’s archives. They are revealed by discontinuities in surface outcrops, and in drill logs and core samples taken from deep drilling, sea sediment sampling, lake strata, tree rings, stalactite rings and ice cores.

There is zero evidence in Earth’s archives of an extinction event caused by high levels of carbon dioxide or by gradual global warming.

In fact, we see the reverse – warm eras like the modern warming are followed closely by higher levels of carbon dioxide, which encourages plants and supports abundant life on Earth.

Increasing ice is the big thing we have to fear. This is always followed by declining levels of the gases of life (carbon dioxide and water vapour) in the atmosphere. This twin disaster will herald widespread starvation of all plants and animals on Earth.

The planet’s archives will then record one more Extinction Event.

FLOOD PLAINS ARE FOR FLOODS