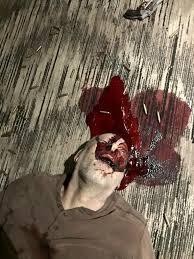 Every few weeks we take a ute-load of sheep to the abattoir. And every time we have trouble unloading them.

Damaras are smart sheep. They look down the ramp, sniff the air, listen to the cacophony of complaining animals and decide: “There is no way we are going in there.” So they form a “circle of safety”. They press into a tight circle with their heads together, presenting a barrier of bums as impregnable as a wall of Roman shields.

Pull one sheep out, shove it down the ramp and try to grab another – the first one is already back in the circle.

So I asked my sheep-canny neighbour, Fred McNally, how to unload smart sheep.

Easy, he said: “Just train a Judas goat to walk down the ramp, along the race, and into the holding yard. The sheep will follow him. Bring the goat back and take him home for the next load of sheep.”

“Course you have” said Fred. “Judas goats are leading our great primary industries to destruction.

“Look at Ag Force – supposed to represent Aussie farmers and graziers. Their pastures and animals are all part of the carbon cycle of life, but they cannot see that all grazing animals are carbon neutral. And they are nice guys to those making war on carbon and do not fight green bans which protect woody weeds that are invading natural grasslands and open forests. They hope that their craven co-operation will yield them special treatment – a comfy seat on some government board or a nice little soil-carbon subsidy somewhere.

“And the NSW Farmers, who used to have carbon sense, have now discovered the climate religion and now ‘support the transition from fossil fuels like coal and gas towards more renewable energy sources .’

“Have they forgotten all the diesel, petrol, oils and fertiliser they use? Or have they invented wind-powered tractors?

“And, what about the Judas goats leading most big coal companies and their workers? They have plenty of educated people who understand carbon chemistry and physics, but most industry and union policies are green-endorsed garbage. They even rob shareholders with attempts to bury the gas of life in carbon cemeteries, a strategy which will just waste money and coal, have no effect on global temperatures, and is even too stupid for most Greens.

“I’ll bet none of these industry big-wigs have hard-work hands.

“It’s time the Judas goats leading our industries were put out to pasture.”