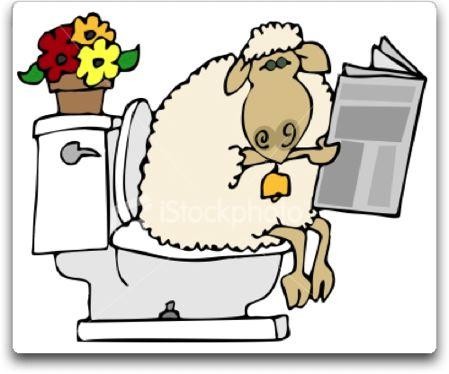 Yesterday morning, before the frost had left the grass, I was sitting quietly beside my fashionably-green wood-burning heater reading the latest explanation in “The Green Gospel” on why the Arctic ice  had not yet melted.

Suddenly Flora burst into the room like an Arctic blizzard with a look on her face that said I was in big trouble.

“Did you tell that awful Professor Percival he could cut holes in Maria’s belly and leave her with a bum bag and a rubber sausage strapped to her back?”

“Well tell him to torture that awful Dorper ram that butts me, not my darling Maria. Where are those animal cruelty people when I need them”?

The Prof had coached me on the settled-science story which I now relayed confidently to Flora: “Sheep and cows release lots of carbon-rich gases from both ends. The science says this will affect the atmosphere, heat up the globe, melt the ice caps and we will all drown.”

“He is being paid big bucks to postpone that watery judgement day.”

Fred McNally, my crusty old neighbour on the other side, was not impressed with the Prof’s reasoning.

“Surely even a dopey hobby farmer like Percival understands the carbon cycle? Every sheep has two inlet pipes – one for food and water, one for air. And it has three exhaust pipes for wastes – liquid, solids and gases. Sheep cannot manufacture carbon. Every atom of carbon coming out of a sheep’s exhaust pipes must have come in via that sheep’s feed pipes. And every atom of carbon in the sheep feed must come from the grass which gets it from . . . the atmosphere.”

“Sheep live on recycled burps and farts. Along the way, lots of carbon is tied up in woolly jumpers and in the bodies of sheep, lambs, dingoes and hungry humans.”

“Why pick on a non-problem like sheep? Wild dogs have already eaten half of Australia’s flock – we need a predator among the plague of clueless Professors.”

“Can’t the silly old fart see that all sheep are green?”

In the sanctimonious cant of those who preach the green religion, sheep (and cattle) should be hailed as “carbon neutral”.

Disclosure: The author does raise sheep and cattle on natural pasture, and “Maria” the pet ewe does exist.  forbes@carbon-sense.com