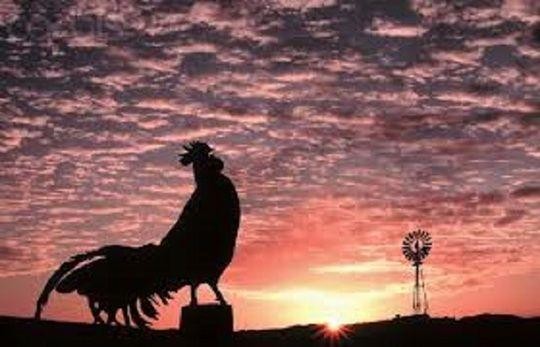 Every morning just before dawn our rooster crows and soon afterwards the sun comes up. We have observed no exceptions over three months – clear evidence of perfect correlation. Therefore we have concluded that the crowing rooster causes the sun to rise.

My wife Flora (who believes that the Cooee birds bring the rain) said: “I knew that ages ago – Professor Percival told me.”

So I consulted Professor Percival, our neighbour. He is Professor Emeritus in the “Science in Society” Department at Top-Line University. He specialises in the effect of sound waves on atmospheric transmissivity. He says that some roosters produce sound waves of just the right frequency to affect the dawn visibility through the thick morning atmosphere. He has written peer-reviewed papers on the subject which has been named “The Percival Effect”. In all the hallowed halls, it is regarded as “settled science”.

However, we decided that our rooster was not doing his day job, so he ended up as roast dinner last night.

Flora was very concerned – “what if the sun does not appear at all tomorrow?” she wailed.

But the sun rose as normal.

Flora was relieved but a concerned Professor Percival went off to check his calculations “for feedback loops”. He is still checking.

One thing was proved conclusively in just one day – roosters crowing do not make the sun appear. Something else causes the sun to rise. Our ninety-two correlations did not prove causation. But just one disproof was needed to kill the Percival Effect.

One disproof is all that is needed.

“No amount of experimentation can ever prove me right; a single experiment can prove me wrong.” Albert Einstein

THE SCARIEST MOVIE I HAVE EVER SEEN

FDA SAYS IT DIDN’T BAN IVERMECTIN – FINDS ITS PANTS ARE...