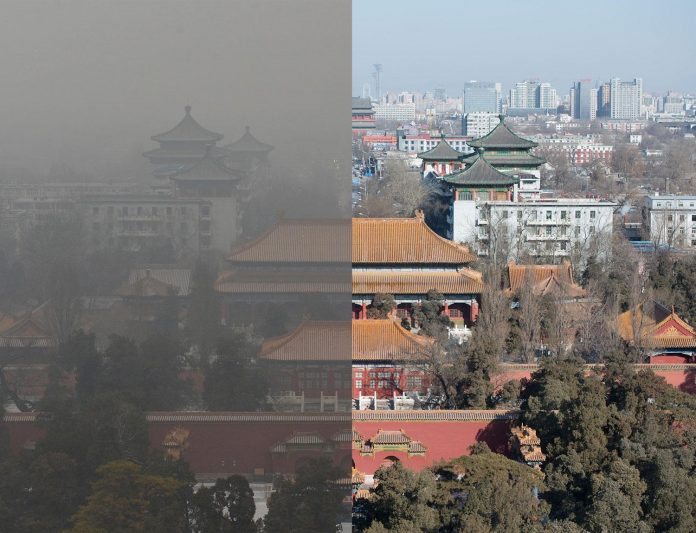 The war on hydro-carbon fuels is based on two feeble legs – “it causes global warming, and it creates pollution.”

Both legs are unsound, especially the pollution claims.

No sensible person approves of pollution of air, water, land or public places by humans.

Have a look at some real pollution:
http://www.midwayfilm.com/

But no pollution whatsoever is caused by the main product of the combustion of hydro-carbons – carbon dioxide. This is a colourless, non-toxic gas-of-life on which all plants (and animals) depend.

In these days of carbon-neurosis, coal-power gets blamed for all bad things, even the Asian Smog.

What causes the Asian Brown Smog?

Dust is a significant component. Winds whip up dust from dry land, roads and the huge Gobi and Arabian Deserts, or an up-wind volcano explodes. No dust comes from the emissions of a modern well-designed coal-fired power station.

Smogs may also contain soot and ash. These come from open-air fires all over Asia burning wood, cow dung, paper, cardboard, plastic, rubber tyres and other rubbish; from stoves and heaters using unwashed high sulphur coal or high-ash briquettes; from forest fires and uncontrolled coal-seam fires, cremations in India and yeon-tans in Korea.

Some smog contains compounds of sulphur, nitrogen or other chemical pollutants. These fumes are produced in open fires and vehicle exhausts, especially from badly-maintained vehicles, boilers and phut-phuts. They are not released by modern coal-power stations whose exhausts contain little other than nitrogen, water vapour and carbon dioxide – the three natural gases-of-life.

Those blaming coal power for smog need to read the history of last century’s deadly smogs in London and Pittsburgh. These were cleared by bans on open-fire heaters and cookers and the provision of “clean-coal-by-wire” – electricity produced in modern power stations with good emission controls and burning washed high-quality coals. Piped coal gas also helped clean the air of London.