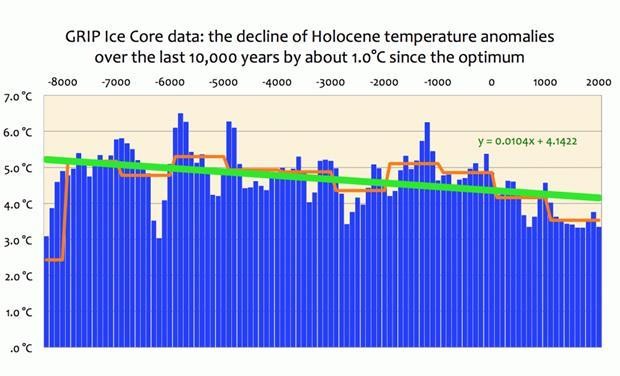 2015 is the make-or-break year for climate alarmism, with a crucial battle planned for Paris in November. So we can expect regular bursts of global warming propaganda.

The year started on cue with a breathless announcement from the US National Climate Data Centre: “2014 was Earth's warmest year on record” (their records start in 1880).

The Little Ice Age ended in about 1880. Therefore it is no surprise that global temperatures have generally risen since then. And it reveals nothing about the cause of the warming.

Moreover the announcement hides more than it reveals.

Firstly the alleged new peak temperature is just 0.04C higher than 2010. Who are they kidding? No weather recording station can measure to that accuracy. Once the likely error bars are added to the averaged data, the story changes to “recent global temperatures remain flat”.

Secondly, what does “average” mean? Almost every place on Earth has a different average temperature, and the averages range from 34C to -58C, a range of 92C. With very large daily and seasonal variations, an unevenly scattered and variable set of temperature recording stations, plus frequent “adjustments” to the raw figures, their calculated “global average” is probably a manipulated and meaningless number.

Trends are more important than spot values. Satellite data and proxies such as ice core data give more reliable long-term “average” temperature trends; both records say that 2014 is NOT unusually high.

So the “warmest year on record” is just another warmist temperature lie.