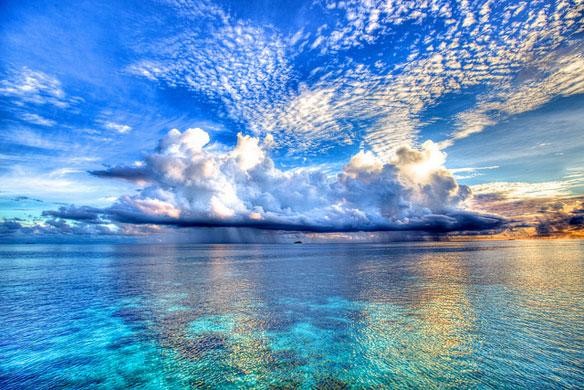 The most careful analysis of world sea levels suggests they are rising at between zero and 2mm per year. Measurements to this accuracy are questionable as they are complicated by changes in ocean currents and wind direction, and shorelines that may rise and sink.

Sea levels are never still, but with global temperatures flat and snow cover and polar ice steady, sea levels are probably as stable today as they ever get.

However, we still have creative climatists concocting complex computer models that predict dangerously rising seas to justify their goal to ban coastal development and to revive their failing war on carbon.

At the depth of our recent ice age, just 16,000 years ago, a thick sheet of ice covered much of North America and Northern Europe.

So much water was locked up in ice that humans could walk on dry land from London to Paris, from Siberia to Alaska and from New Guinea to Australia. The River Rhine flowed across a broad coastal plain (which is now the North Sea) and met the Atlantic Ocean up between Scotland and Norway.

There was no Great Barrier Reef as Queensland’s continental shelf was part of the coastal plain, and rivers like the Burdekin met the ocean about 160 km east of its current mouth. Most of its ancestral river channel can still be recognised beneath the Coral Sea.

Then, about 13,000 years ago, with no help from man-made engines burning hydrocarbons, the Earth began warming. This was probably caused by natural cycles affecting our sun and the solar system, aided by volcanic heat along Earth’s Rings of Fire under the oceans.

The great ice sheets melted, sea levels rapidly rose some 130m and coastal settlements and ancient port cities were drowned and are being rediscovered, even today.

As the oceans warmed, they expelled much of their dissolved load of carbon dioxide. The warm temperatures and extra carbon dioxide plant food caused vigorous plant growth. Permafrost melted, forests colonised the treeless tundra and grasses and herbs covered the great plains.

Without any zoning laws to guide them, our smart ancestors moved ahead of the rising waters and adapted happily to the warmer climate with less snow, more rain, more carbon dioxide plant food and more ice-free land.

This warming phase peaked in the Medieval Warm Era about 1,000 years ago, when sea levels also peaked. They fell during the Little Ice Age, rose slightly during the Modern Warm Era, and are relatively stable now.

Rising seas are never a lethal threat to life on Earth. The danger sign is falling sea levels caused by a return of the great ice sheets. This would quickly put high-latitude farming into the deep freezer, thus creating widespread starvation. Trying to grow crops on emerging salty mudflats in an icy climate will give some future farmers a real climate concern.

And despite World Heritage listing, when the next ice age comes the skeletons of the stranded Great Barrier Reef will become bleached limestone deposits on the coastal plain. The indestructible coral populations will abandon their marooned homes and build new reefs further out under the retreating seas.

AND THE FULLY VACCINATED ROCK OF GIBRALTAR CRUMBLES