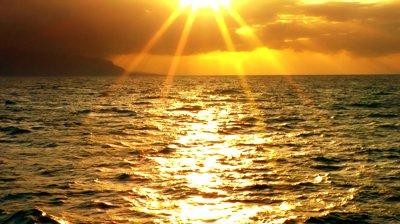 The threats we should fear are the periodic violent eras of volcanism and the life-killing ice ages many of which start with massive snow/hail storms such as the one that suddenly extinguished the mammoths.

This is why many ancient peoples celebrated the warmth of spring and worshipped the Sun God.

For too long the western world has been misled by alarmist claims that a tiny trace of carbon dioxide gas in the atmosphere will cause catastrophic global warming. In the continuing drama of natural climate change, global temperatures are the result of far greater forces. Climate research should focus more on the cycles of the sun and solar system and their effect on global climate and on the periodic eruptions along our vast sub-marine volcanic belts. These control the ebb and flow of ice ages and most of the many extinction events that Earth has suffered.

Most geological eras have ended with massive volcanism on land and in the long volcanic/tectonic rifts beneath the Pacific, Atlantic, Indian and Arctic Oceans. Outpouring of lava under the seas causes ocean warming and increased evaporation while the dust from land-based volcanoes darkens the skies, creating a frigid atmosphere. Warms seas and cold skies cause heavy precipitation of rain, hail and snow. The increased snow cover then reflects any solar energy that gets through the volcanic dust, thus maintaining surface cooling. That is how the life-killing ice sheets grow.

Atmospheric modellers have dominated the climate debate for too long. It is time to ask well-informed geologists about Earth’s ever-changing climate history which is written indelibly in the rocks. Instead of wasting billions on bigger computers for yet more atmospheric models, let’s do some factual research on volcanoes beneath the oceans. Then ask some astro-physicists about the possible influence of solar cycles, sunspots, cosmic rays, cloud formation, earth magnetism, rogue asteroids and movements of the solar system through the galaxy.

To believe mankind can counter the effect of these powerful natural climate controllers by trading carbon credits and capturing a few sea breezes and sunbeams using green energy toys is indeed a sad sign of the modern climate madness.