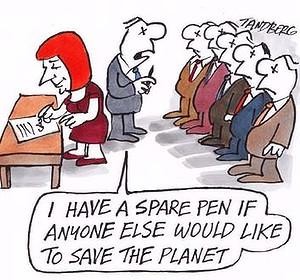 The Kyoto Protocol was dreamed up by the Climate Jet-set in Kyoto, Japan in 1997.

One of the first decisions of born-again-green PM, Kevin Rudd, was to commit Australia to Kyoto Phase 1 in 2007.  This treaty required signatories to reduce production of carbon dioxide to 5% below 1990 levels by 2012.

As a late joiner, Australia got a lower target, involving no actual cuts.  And they achieved that easy target by robbing Australian landowners – they stole carbon credits from landowners by imposing tree clearing bans. That larcenous trick can’t be pulled twice.

Ironically, the death notice for the Kyoto misadventure was posted by Japan, the birthplace of Kyoto, when they announced at Cancun in 2010 that Japan would not agree to any further targets. Japan was shocked at the billions in liabilities they had accumulated by not meeting Kyoto 1 target cuts.

This target, agreed to without due diligence, is dreamland stuff for Australia. Once the growing population is taken into account, this target would require Australians in 2020 to maintain industries and create new jobs using 30% less hydro-carbon energy per capita than was used in 2000.

Mining and mineral processing, agriculture, manufacturing, transport, tourism, electricity generation, cement, forestry and fishing are the backbone industries of Australia. Not one of these industries could maintain production while also significantly reducing their production of carbon dioxide, unless Australia embarks on a crash program of building new hydro and/or nuclear power stations. The chance that green regulators or politicians will allow either of these options any time soon is zero.

The use of carbon fuels, more than any other indicator, measures the growth and health of modern economies. The only way to kill carbon is to kill the economy – close industries or send them overseas. The Global Financial Crisis probably did more to reduce the use of hydro-carbon fuels than Kyoto will ever do.

Japan’s exit from Kyoto obligations was soon followed by Canada and Russia. USA never signed, nor did China, India, South Africa or Brazil.

Thus the four biggest economies in our region (USA, China, Japan and India) are not burdened by Kyoto. Nor are our big competitors – Brazil (iron and beef), Indonesia (coal), Chile (copper) and Canada (wheat). We only have the Kiwis and the faraway Europeans sharing the sinking Kyoto ship.

The Kyoto Agreement is a failure. Australia repealed the costly carbon dioxide tax. Next we should get rid of Kyoto liabilities.

WHO THE HECKLE ARE THE ICEO?