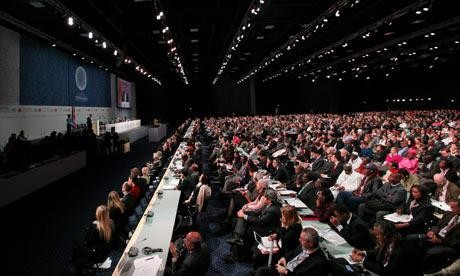 Twenty-two years ago a bunch of green activists calling themselves “The Earth Summit” met in Rio and invented a way to tour the world at tax-payers’ expense – never-ending conferences on environmental alarms.

Like any good bureaucratic committee, they soon established sub-committees on sustainability, pollution, development, energy, forestry, water, biodiversity, endangered species, poverty, health, population and Agenda 21 (this item alone had 40 chapters each with its own sub-committee). Environmental conferences became the greatest multi-national growth industry in the world financed mainly by tax payers via participating public servants, climate academics, employees of nationalised industries and tax-sheltered green “charities” such as Greenpeace and WWF.

They really hit the Mother Lode with their creation called “Global Warming”, and its proxies “Climate Change” and “Extreme Weather”.

The 21st Climate Change birthday party will be held at the Conference of the Parties in Paris in December 2015, while the Small Islands Developing States will tour to Samoa, but any important decisions will be taken behind closed doors by the canny BRICS Nations (Brazil, Russia, India, China and South Africa).

The Climate Conference Circuit became a bigger boost to airlines, hotels and fine dining than the Olympic Games and G20. Australia alone sent the PM plus a team of 114 to the failed Copenhagen Conference. Rich and poor all over the world have endured 21 years of wasteful spending that could have built flood-proof infrastructure, drought-proof water supplies, erosion-proof beach fronts and pollution-free waterways. It has gone down the global warming gurgler without a single visible benefit for suffering tax-payers.

With most western governments running desperate financial deficits, it is time to cut the costs of this climate chatter. Australia should burn no more jet fuel sending people to any climate conference anywhere. If they want one, they should use bicycles, tele-conferencing or the postal service.