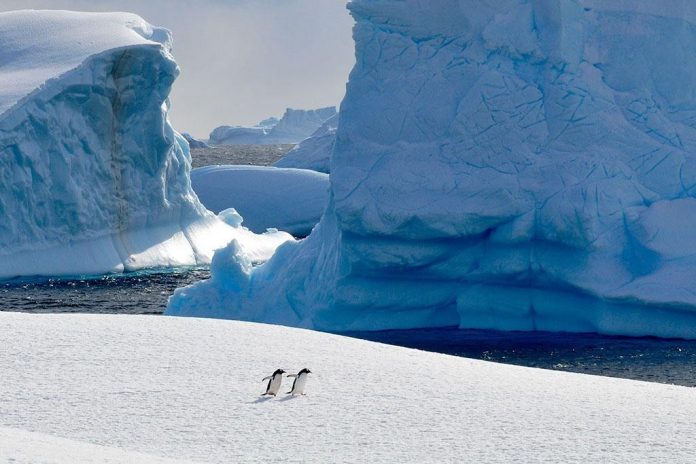 Alarmists see a man-made calamity in every change in the Antarctic ice cap. There is nothing unusual about ice caps melting, ice sheets splitting, icebergs calving or glaciers advancing or retreating. This has been happening naturally for eons.

In 1513, a Turkish sea captain, Piri Reis, using ancient maps, produced an accurate chart of the coastline of Antarctica which is now covered by a kilometre of ice. Geological evidence suggests it was ice-free just 6,000 years ago. Several past eras of icing and melting follow the natural cycles of the solar system, totally ignoring man’s puny activities.

It is not surprising that most glaciers and ice sheets show melting and calving while snow is being added at their source. If this did not occur, much of Earth’s water would eventually become tied up in the ever-growing ice sheets, as happened in the Ice Ages. And when land-based ice caps melt during periodic warm eras, the sea level inevitably rises and all life-forms must adapt to the new shoreline.

Sea levels rose swiftly by some 130 metres as ice sheets melted at the end of the latest ice age just 13,000 years ago. This made islands out of many coastal hills. We are all descendants of a long line of survivors who had the sense to adapt to these dramatic sea level changes without needing edicts from climate witch-doctors prohibiting camp fires and ordering villagers to abandon their seaside settlements.

There is no evidence that man’s production of carbon dioxide is having any effect in Antarctica. Despite rising levels of atmospheric carbon dioxide, global surface temperatures are steady, global sea levels are rising very gently and the Antarctic Ocean is cold because the sea-ice surrounding Antarctica has increased to record levels.

Examination of ice cores suggests that it takes several hundred years for Earth’s vast oceans to fully adjust to cycles of global warming and cooling. Thus today’s oceans may be still warming, expanding and degassing in gradual adjustment to the medieval warm era which peaked about 700 years ago.

Ice caps grow and shrink naturally, depending mainly on the relative temperatures of the atmosphere and the surrounding oceans. A warm ocean with a cold atmosphere is a recipe for rapid accumulation of snow and ice on adjacent land. Moisture evaporates rapidly from the warm ocean, and then the cold air over the land triggers precipitation. A warm atmosphere and a cool ocean will reverse that process and see the ice caps return to the ocean.

It is all about the ratio of precipitation versus outflow and melting.

The Arctic is a totally different story, because here, there is no land – just the Arctic Ocean. Floating sea ice comes and goes, depending on the temperature and direction of winds and ocean currents, but the melting of floating ice has no effect whatsoever on global sea levels.

Undersea volcanism is adding warmth to oceans at both poles and under-ice volcanoes may well be melting and undermining ice sheets in the West Antarctic.

Someday the huge Antarctic ice cap may melt, or large slabs of ice may slip off the continent into the sea. When that happens, the seaside homes of Al Gore and Tim Flannery will be submerged and other shore-dwelling humans must evacuate or drown.

These are all un-stoppable natural events. There is no chance that polar ice will be affected in the slightest by carbon taxes in Australia, wind turbines in the North Sea, or solar panels plastered all over California.

The Green Empress Angela Merkel and friends have No Clothes