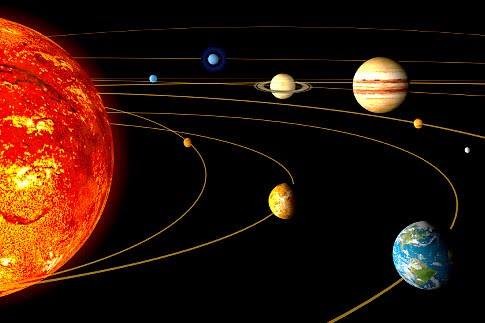 Apart from a tad of geothermal heat and a wisp of heat from nuclear power generators, every bit of surface energy (including coal and biomass) comes directly or indirectly from the sun. There is no other source of surface heat—-everything else just stores, releases or re-directs solar energy.

Surface heat is maximised when the sun is directly overhead, near a peak in the sunspot cycle and when Earth's orbit comes closest to the sun (perihelion).

The hottest places on earth will be found near the equator, around mid-day, in mid-summer, at perihelion and when there are no clouds in the sky to reflect solar radiation.

Temperature will be maximised at full Moon and when there is no cooling wind and no nearby surface water or moist soils to cool things by evaporation.

Since higher temperature also occurs at lower altitudes, one of the hottest places on earth is Death Valley, a desert below sea level, where the temperature can reach 56C on a mid-summer afternoon.

Frigid temperatures are found near the poles, where solar energy is weak. The coldest place on Earth is Vostok at high altitude in Antarctica where the air is very dry and where the temperature can go as low as minus 89C with a cloudless sky in the dead of winter.

Since both extremes could occur simultaneously, Earth's maximum daily temperature range is thus up to 145C. But at any single place, the diurnal variation is more likely to be about 15-40C

Carbon dioxide has no effect on any of the above temperature drivers— it generates no heat, cannot affect latitude, solar orbits, sun spots, moon phases, altitude, season, time of day, clouds or the proximity of water. All it can possibly do is encourage plant growth, and intercept, absorb and redirect a tiny bit of radiant energy passing either way between the sun, the Earth's surface and space.

But that effect is almost exhausted at current levels of carbon dioxide. Doubling the carbon dioxide content from 400 ppm to 800 ppm (which may take the next 100 years) might possibly increase surface temperatures by 1- 2C — not even noticeable compared to the daily temperature ranges we cope with now.

Everyone can feel the powerful warmth of the rising sun, the variations between summer and winter, the moderating effect of clouds and the shock of hot and cold winds.

But even if carbon dioxide levels doubled overnight, most people on earth would not notice any difference.