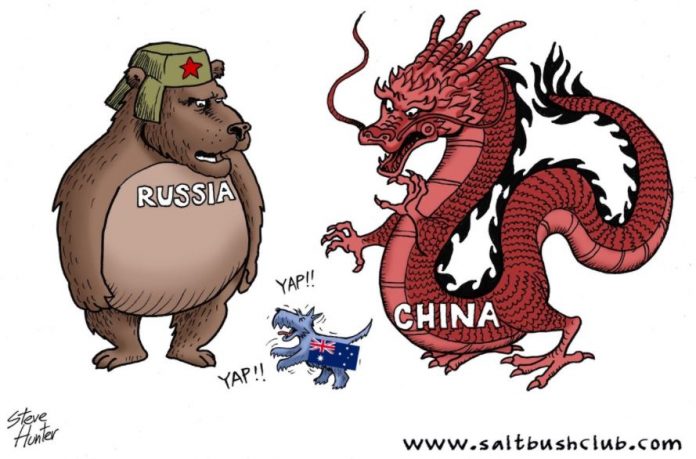 “God was on the side of the nation that had the oil.”
Prof. Wakimura, Tokyo Imperial University

Russia is one of the world’s largest producers of petroleum, natural gas, and coal.

In Europe, despite decades of taxes on hydrocarbons, subsidies for green energy and net zero plans, hydrocarbons still supply 70% of EU energy.

And Russia supplies the lion’s share of this: 40% of EU gas, over 25% of their crude oil and nearly half of their coal comes from Russia.

Russia is also a big exporter of energy-dependent metals such as iron, steel and aluminium, and is the world’s third biggest producer of gold, the money for troubled times.

Kiev, the capital of Ukraine, was the birthplace of Russia twelve centuries ago, and many Ukrainians speak Russian and feel Russian.

If Western hostility to Russia causes more Russian fuels and food to go East to China, Siberia, the Koreas, Japan or Taiwan, there will be a mad scramble by Europeans to replace them.

Before we celebrate how the brave Australian Terrier baited the Russian Bear and the Chinese Dragon, we should first check Australia’s fuel supplies.

Australia has limited domestic production of oil, rapidly falling refining capacity and only three to four weeks supply of fuels like diesel, petrol and avgas.

Despite having extensive sedimentary basins and world class geological skills Australia buys most of its crude oil and refined products.

Russia remembers defeating two European “Grand Armies” – both Napoleon and Hitler were beaten by cold weather and the lack of fuels and food. Napoleon’s horses ran out of hay, Hitler’s Panzers ran out of fuel, and both invaders faced starvation and frostbite.

“The war was decided by engines and octane.”
Joseph Stalin

“Above all, petrol governed every movement.”
Winston Churchill

Russia is building gas pipelines while Biden and his green friends closed the Keystone XL pipeline (to deliver oil from Canada) and declined to renew US gas drilling leases. USA even became an importer of Russian crude oil and petroleum in 2021.

Russia has a huge landmass. It is the world’s largest exporter of wheat and a big exporter of barley, corn, sunflower and canola.

Anything that impacts Russia’s exports of food or fuels will cause chaos in world energy and food markets.

Just one wicked winter may destroy Russia’s enemies once again.

Otherwise it will become collateral damage in the coming world energy/food crisis.

And if the two super-powers of Eurasia do decide that this is the time to enlarge their empires, we will not stop them with net zero energy, wind power, battery-powered tanks, a biofuel navy or submarines on the never-never.

Food and Fuel for Thought :

Why Ukraine Matters to Russia:
https://www.trtworld.com/magazine/why-ukraine-matters-to-russia-so-much-52281

Germany turns back to coal and natural gas as millions of its solar panels are blanketed in snow and ice:
https://worldnewsera.com/news/startups/germanys-green-energy-failure-germany-turns-back-to-coal-and-natural-gas-as-millions-of-its-solar-panels-are-blanketed-in-snow-and-ice-tech-news-startup/

Blood for Oil: The Quest for Fuel in World War II:
https://eiaonline.com/history/bloodforoil.htm

IS PUTIN BEING TOO NICE?